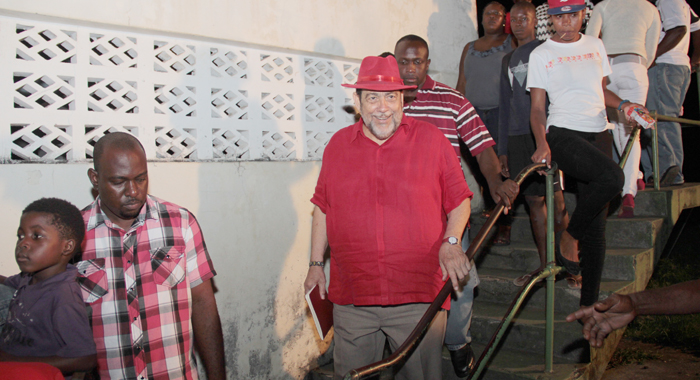 PM Gonsalves as he exited the ULP South Leeward Constituency Conference in July, where Williams nominated Thomas as the ULP’s candidate for South Leeward. (IWN photo)

Prime Minister Ralph Gonsalves was seen walking with a slight limp on the weekend.

He told reporters on Saturday in Vermont that the problem was his knee.

“What happened is this: I injured it. I have to be more careful. But not injured it severely, I’m alright,” said Gonsalves, who turns 68 on Aug. 8.

“You see how I come down there perfectly okay,” he said in reference to his descent of a flight of steps at the Vermont Community Centre, where the Unity Labour Party in South Leeward held its constituency conference.

“This morning when I got up, I felt it, but all I did was put a band on it and put the usual anti-swelling thing that you put. My health is fine,” Gonsalves said.

In April, Gonsalves sought to assure Vincentians that he is in good health, having returned to work after doctors ordered him to rest for a week because of an ankle injury.

He said he had twisted his ankle in his bathroom and a small cut to the sole of his foot had gotten infected.