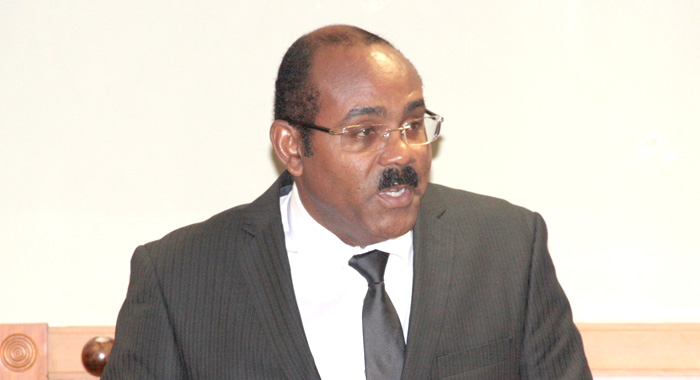 Last Friday’s meeting of the Eastern Caribbean Central Bank (ECCB) monetary council was a sobering experience for the newest prime minister in the sub-region, Antigua and Barbuda’s Gaston Browne.

“I do not wish to frighten anyone here in the sense that we have the skill, we have the ability, we certainly have the commitment to overcome any challenge, but I say here that all of our member states are in trouble and at least one or two is or are in dire straits,” Browne told the opening ceremony of the 59th meeting of the Organisation of Eastern Caribbean States (OECS) Authority in Kingstown on Saturday.

“It highlighted for me that the member states of the OECS are being severely buffeted by the winds of international economic turbulence so much so that if the Monetary Council did not already exist it would have to be invented,” said Browne, who was elected to office in June.

“Thankfully, the monetary council does exist and it informs and forms an integral part of the cluster of the regional economic and political governance arrangement that serve our member states so well.”

Browne said the OECS economic union has created a single space that allows the nine-member group to scale up its economic production and control the cost of providing goods and services that its people need.

Browne declined to elaborate when asked to do so after the ceremony.

But he was not the only leader to speak in stark terms about the situation within the bloc.

“And that is where we call on our development partners to appreciate the challenges with which we are confronted.

“The challenge which we have, with the issue of debt, the issues of our banking system, our financial system, strengthening those institutions, we are going to need an injection of serious hard financial resources to address these challenges,” Skerrit said.

4 replies on “Some OECS nations in ‘dire straits’ economically”