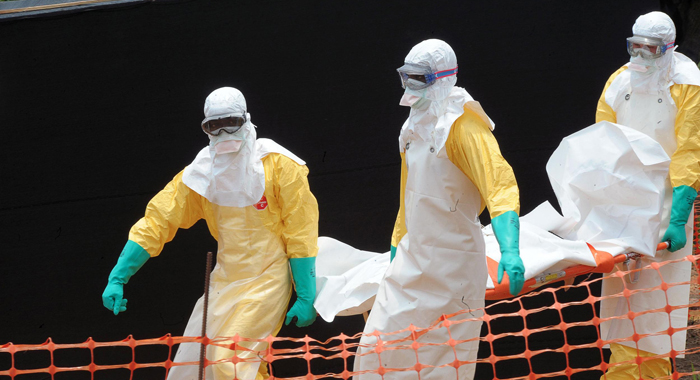 The latest outbreak of the Ebola virus has killed 6,388 persons, mainly in Africa. (Internet photo)

The Ministry of Health, Wellness and the Environment met this week with owners and representatives of funeral homes to sensitise them on the management and safe disposal of bodies in the event of an Ebola virus outbreak in St. Vincent and the Grenadines.

The Ministry has been advised that the handling of bodies of individuals who died from Ebola should be limited and that there should be no manipulation of the corpses, that is, no autopsies should be performed, no consideration should be given to having bodies embalmed, and no opportunity should be provided for viewing.

Dr. Franklyn James, registrar in the Department of Primary Health Care and Member of the National Surveillance Committee, speaking to the representatives of the funeral homes during the meeting, stated that while recognizing the existence of deep-seated funeral rituals and burial practices in different cultural and religious contexts, ensuring safe disposal of dead bodies must be considered critical to limit the spread of the Ebola Virus.

The Ministry’s other representatives present at the meeting offered that personnel engaged in the management and disposal of dead bodies should use personal protective equipment at all times when handling dead bodies, including gloves, aprons, overalls, fluid resistant gowns, surgical masks, eye protection gear and closed shoes, with support provided by environmental health officers.

7 replies on “Undertakers briefed on disposal bodies of Ebola victims”