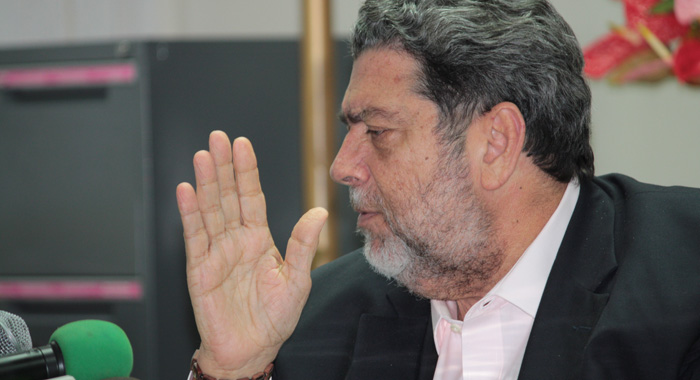 The following statement was reportedly made by Mr. Ralph Gonsalves, Prime Minister of St. Vincent and the Grenadines on Aug. 4, 2014.

“There is no legislation, normally in the House that you need the support of the opposition. … We have 13 [Members] and they have nine. And because it is a unicameral House, and because of the way the Constitution is fashioned, the only things that senators and the attorney general can’t vote on is if there is a matter relating [to a vote of] no-confidence.”

But, based on those numbers, in the absence of an overwhelming electoral decision against the Government, it would be virtually impossible for the people to ever achieve a change in government. As you have indicated, even a vote of “no confidence” in the government (especially given that there could be no substantive grounds on which to raise such a motion) would be unsuccessful. Therefore, the true political situation in St. Vincent and the Grenadines is such that, as long as the governing party leader maintains total control over the thoughts and expressions of his members, that government will remain in power. There is no doubt in my mind that, by means of skillful political maneuvering over the years, you have maintained absolute control of your elected and non-elected members. It would seem that, given the present situation, the only other avenue through which a change in government could be accomplished is if at least two elected members would decide to cross the floor from the government to the opposition side of the Assembly, a practice which was common during the Joshua and Cato years but which exacerbated rather than solved the problem and which, I doubt, any of the needful and subservient politicians today would even consider. I find it paradoxical that you were so determined to change that same constitution that you admit gives you and your government so much power. But, I suspect, that even such a high degree of power is not sufficient for you.

I tend to think that, when the Constitution was written, the governing party was given this amount of power, through a larger number of appointed senators, in order to ensure governmental continuity in the face of a possibly too demanding or out of control opposition. This matter of appointed senators has led to corrupting tendencies in many Commonwealth countries and more and more countries are trying to completely end this constitutional dilemma by ending the appointment of senators. I also believe there was an expectation that all elected and appointed party members would consist of honorable, free thinking, men and women who would support good and just government policies, who would have a sense of right and wrong policy, and who would not completely bend to the every command of an out of control strong man. In other words, I think that the Constitution took for granted that members would have a sense of respect for each other and for the conflicting views of each other and that they would, at times, as much as possible, try to accommodate opposing view points in and out of cabinet. With the above statement, you show total disregard for the finer points that inform the Constitution: you flaunt your excessive power, you throw it in the faces of the Opposition, you willfully parade it in front of the eyes and noses of the Vincentian media and public, you pollute the minds of the uninformed and uneducated masses, and you intimidate the few who might recognize the error in some of your ways. But the sad thing is that they have all been conditioned to accept the ignoble insults imbedded in some of your statements primarily because they have no way of controlling the power which the constitution has given to you and your government.

“Since the 27th of July 2007, the fellows have not co-operated with us on really anything. … The fact that they may vote on the same side as us in a bill, it doesn’t mean that that is co-operation.”

This seems to me to be a very clear statement that (1) the Opposition has occasionally voted with you and (2) that they have cooperated. But you again double speak in that you have made it clear that you consider that type of cooperation as merely “supporting” a bill. It would seem then that you have a special meaning for the word cooperation which hints at a possible suggestion that you would expect the Opposition to sit with your party members and work together to draft bills before they are presented; in other words, a kind of one party rule. If this is not being done by the Opposition, then I would have to agree with you that “you can’t suspend or stop co-operation which you have not been giving”. There may have been occasions, from 2001 to 2007, when the two parties had adopted such an approach to really divisive issues but it should not be the norm in a two or more party, democratic system because, under that system, the Opposition is supposed to be a government in waiting. Whether you like it or not, its basic reason for being, its mandate, is to “oppose, to expose and to depose,” if cause and circumstance permit.

They are not allowed to do this through political action that deteriorates into a roadblock rally that paralyzes the nation. Rather, they are supposed to do it democratically, through strategically criticizing and voicing their opinions publicly and in the Assembly. Whether their criticism is of the government’s response to the 2010 or of the 2013 Christmas Eve disaster or any other subject matter, it is their constitutional right but, you cannot then, as a result of a simplistic, possibly intemperate, statement by one individual, denigrate the actions of an entire Opposition party by saying that “basically, what they are out for is political war”. By making such a statement, you elevate the ordinary into the extraordinary; you introduce an inflammatory process into the discourse. You are fanning a tiny flame into a bush fire. But, to add insult to injury, you then go on to say “we in the government, we are not interested in political war”. Here, you are attributing an invective to the Opposition that they never voiced but, more succinctly, you manage to turn your misappropriation into a very desirable alternative; the icing on the poisoned cake follows — “we are interested in the good governance of the country in the interest of the people”.

What kind of beguiling nonsense is this? You are the one who raised the subject of war, not the opposition. You are the one who, through political war, will somehow “ensure good governance of the country in the interest of the people?” No respectable leader of a country should be allowed to get away with such inflammatory expressions and exploitative double speaking.

You are out of control, Ralph Gonsalves!!! You’re behaving like a bully and a spoilt brat.