LIME to invest US$ millions in SVG; HDTV expected in 2015 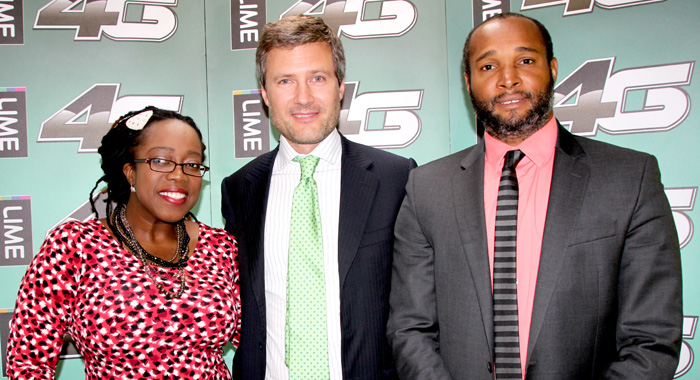 Martin Roos, LIME’s newly appointed Chief Executive Officer has indicated that he is very satisfied with the work that has been accomplished by the local LIME team.

Roos told a recent press conference that the local LIME team has been doing quite well, and that head office has been “struggling” to keep up with the Vincentian team in terms of investments.

“I have to tell you that since we launched our 4G network just a couple of months ago we have seen one hundred per cent growth…. We continue to deal with a strong demand for broadband services, which I think is testimonial to the great work that has been done here on the island.

“That further underscores the need to give the local team here the extra toolbox to continue to provide great service and that takes millions of dollars… and we are looking for the team to continue to grow, to create networks that are resilient and robust, and can grow in the same pace that people have appetite for advanced telecom services here on the island,” Roos said.

The CEO was in St Vincent to outline plans that head company, Cable and Wireless, has in store for St Vincent and the Grenadines, as well as the other territories where LIME operates.

He pointed out that Cable and Wireless has made the conscious decision to make the Caribbean and Central American region its “home market,” and in doing so, would invest over one billion US dollars in developing the services it already provides, and creating new ones for its customers.

“Specifically here in St Vincent and the Grenadines we would be investing within the coming 12 months six million US dollars, aimed at bringing a fantastic smart phone experience to a 4G mobile network which is already up and running, and we have a few more sites to add, and as Vincentians would know already we have a far better coverage in the island and we aim to replicate that in our 4G experience.

“We have also been driving around and doing lots of speed tests to ensure that the end user, when you use the application that you enjoy all the benefits of a fast mobile communication and already now Vincentians stand to experience the fastest and best coverage mobile network with LIME.”

Roos also said another US$3 million will be invested in upping broadband speeds, with the intentions of delivering up to 50 megabits of speeds to customers by Christmas this year.

When this is accomplished, Roos pointed out, the long awaited LIME High Definition television over broadband would then be a reality, and should be introduced to Vincentians by early to middle 2015.

LIME HD TV has already been rolled out in Barbados, St Lucia, the Cayman Islands and Panama, with sights set on making this country one of the newest locations.

“The first step that we need to cater for is to provide the broadband network that would give good enough speed so that we can deliver a robust and high quality service, because we don’t want to do anything and do it only half way, we want to make sure that we supply something of high quality and the experience that we have from other markets where we have launched,” he pointed out.

Other initiatives that have been introduced include the formation of a new communications unit called Cable and Wireless Business Solutions, and the strengthening of portions of the network, aimed at withstanding disasters.

Roos also said these investments would not be the only ones made in St Vincent and the Grenadines, and that Cable and Wireless would make sure that its commitment to the island is to stay ahead, in terms of mobile performance and once those six million dollars have been spent, the company would immediately embark on a next project to continue to stay ahead of the curve.

“We have outlined all of these investments in an overall strategic framework where Cable and Wireless has decided that we would continue to build upon the one hundred year legacy that we have built in the Caribbean, and to be truthfully honest we realized that we may have underinvested over some time, but be sure that we will make necessary investments to take back initiative and continue to give the Caribbean another legacy that would last another one hundred years.”

Leslie Jack, LIME Country Manager said that the CEO’s visit to St Vincent shows the level of confidence placed in the local company, and sends a clear signal of the parent body’s commitment to the people of St Vincent and the Grenadines.

“We have been investing heavily, along with partnering with the government of St Vincent and the Grenadines to ensure that we meet the many needs of our customers,” Jack noted.