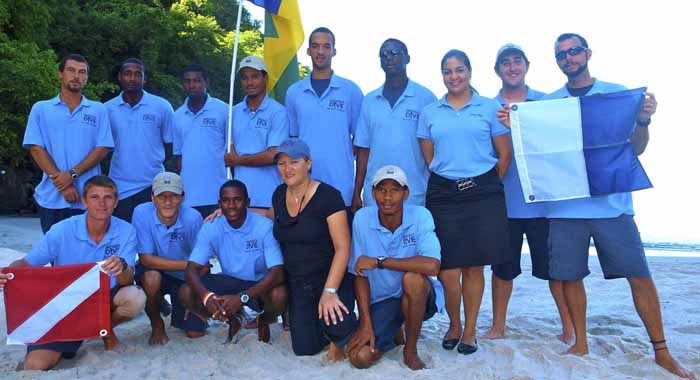 Kay Wilson, in black, and the staff of Indigo Watersports Ltd. (Internet photo)

Buccament Bay Resort on Thursday issued a strong-worded response to Indigo Watersports Ltd, confirming that it has “severed all ties” with the local water sport company.

Indigo, in a press release on Monday, said it had ended it business relationship with the resort mainly because of the “inability of the resort to meet its financial obligations”.

The resort said in a press release on Thursday, “Despite the desire of some to publicly comment on every potentially negative PR story arising from Buccament Bay Resort, the Resort chooses to keep its business, including commercial relationships and disputes, private and will continue to operate in this way going forwards.

“This case is different, however, as after the breakdown of a complex four-year relationship, Mrs Wilson of Indigo Dive has sought to harm the Resort with scathing public comments that lack foundation and must be responded to. It goes without saying that there are two sides to every story and if Mrs Wilson feels strongly about such comments, Harlequin will publicly defend any claim through the court system in St Vincent as the appropriate forum. There are further layers to the dispute that Harlequin is not willing to disclose in public,” the release further said.

“As an external contractor with no knowledge of the Resort’s accounts (apart from that relating to the water sports contract), Mrs Wilson is ill-equipped to speculate on the financial standing of the Resort, particularly given that bookings for our multi-award-winning hotel are up by approximately 20% in 2014 and we have just finished a hugely successful summer period at full capacity.

“In this particular case, there were serious problems with the contractual position to the extent that maintaining Indigo Dive’s services was not commercially viable. After it became apparent that financial and practical disagreements (including clashes of personality) could not be resolved, it was accepted that the Resort and Indigo Dive should part company. Any inference that the breakdown in the relationship was solely the fault of the Resort is patently wrong. The Resort’s professional relationships with other contractors, including global brands, remain strong and healthy.

“The conduct of Indigo Dive is disappointing to say the least as the Resort did its best to part on amicable terms and was engaged in agreeing terms with Mrs Wilson as recently as Sunday; however, the Resort does wish Indigo Dive and Mrs Wilson all the best in their future endeavours.

“We are very excited to be associated with a new, highly experienced PADI diving provider that is now fulfilling the Resort’s excellent diving and water sports offering for guests,” the resort said.