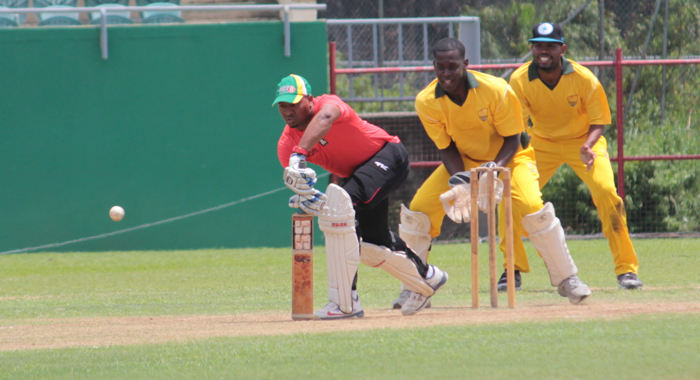 Lime Radcliffe took advantage of a weakened and unfocused Victors One to advance to the semi-finals of the SVG Cricket Association Super40 beating them by 34 runs in the opening match at the Arnos Vale Playing field on Saturday.

Winning the toss and taking first knock, Lime Radcliffe totalled 248/5 in their allotment of 40 overs, then dismissed their opponents for 213 in 37.4 overs.

The match got underway over one hour late, after players and umpires arrived at the main Arnos Vale Playing Field to find the designated match-day pitch with wet spots in crucial areas while the neighbouring wicket, on which the test match was played earlier in the week, was bone dry.

Umpires Goalan Greaves and Samuel Holder decided to switch the match to the dry pitch.

In addition, the 30-yard circle was not marked, while the solitary groundsman who was down to perform duties on the day did not have the keys to gain access to the heavy roller.

It was left to the umpires to fashion a method to mark the 30-yard circle using a piece of rope, since the tape used for this purpose had gone missing since the test match, the groundsman revealed.

The players and executive members of the SVG Cricket Association, already incensed, got even more agitated when it was noticed that the rope that was used for the test match, like the best covers, was lounging on the boundary edges while stakes were driven into the ground to mark the boundary.

The umpires allowed the full quota of overs to remain, notwithstanding the late start.

Lime Radcliffe, who turned up with an assortment of uniform pieces, appeared the more settled of the teams and quickly got into their strides, despite losing the wicket of Romario Pierre (4) with the total on 11.

He was caught by Alston Bobb at point off pacer Norlan Williams.

Verbert King (48), and Andrew Thomas (37) added 61 for the second wicket before King was caught by Bobb off Kenneth Denbar with the total on 72.

Thomas struck 2 sixes and 1 four in his 43 ball stay at the crease. It was 75/3 when Rodney Lawrence (2) was caught off guest player, left-arm spinner Andre Hunte.

King then added 94 for the fourth wicket — with captain Lindon James (78) — before he holed out off the part time off-breaks of Miles Bascombe to make the total 169/4.

James then added a further 46 with Westrick Strough (42) in taking the game away from Victors One.

There were 36 extras in the innings.

Norlan Williams (2/60) took the most wickets for Victors One.

Faced with the task of scoring at over 6 runs an over, Victors One, which were playing without the services of top allrounder Keiron Cottoy (out of state), batsman Donwell Hector (out of state), and opener Atticus Browne (absent), were always under pressure with the long tail.

Their ambition suffered a setback early when Seon Sweene, who opened the innings, went for (1) with the total on 7. Makeshift Shaquille Browne (20) and Bascombe (35) added 52 before Bascombe was bowled by Strough, who had also picked up the wicket of Sweene. Browne and Chrisroy John (17) were both back in the hut by the time the score reached 109. Browne edged offspinner Rodney Lawrence (4/33) to wicketkeeper James with the score 74/3 and John being bowled by Richards 109/4.

Lauron Francois (43) and Bobb (47) then added 69 for the fifth wicket before the Francois, attempting to clear the boundary at the Bequia end, only succeeded in finding the fielder on the edge of the boundary. From 178/5, the innings quickly went into decline with James (3/6), who had removed his gloves to bowl medium pace, picking up 3 wickets, including that of Bobb, when he cleaned bowled the batsman as he tried to hit across the line.

Victors One were then dismissed for 213 when James knocked back the stumps of Sylvester Pitt (0).

Organisers were forced to revise the fixtures after the National Sports Council informed them at the eleventh hour that Arnos Vale One had been rented to a church for Sunday.

The late notice has resulted in the Association having to scrap its third place play-off and will use next Saturday instead to complete the knockout round, with the final set for Sunday at the Park Hill Playing Field.