Lands where house collapsed not suited for construction — expert 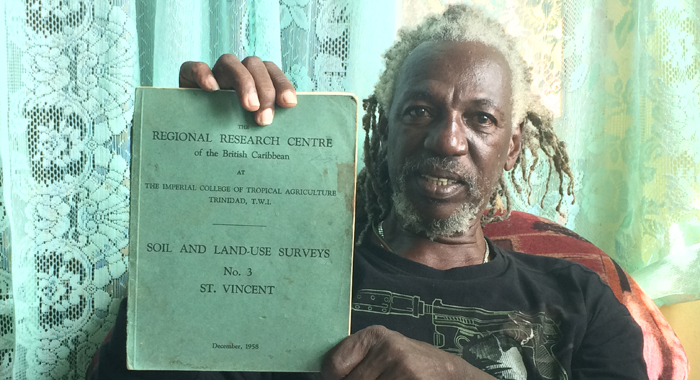 Citing 1958 and 2006 studies, Bishop has said the lands in Clare Valley are not suited for construction. (IWN photo)

An expert says houses should not have been built, or there should have been special engineering at the housing project in Clare Valley, where the three-bedroom house belonging to physician Katisha Douglas collapsed on Friday.

Agronomist Clive Bishop showed I-Witness News on Monday reports from 1958 and 2006, which show that soil of the type where the housing project is located, is not suited for construction or even certain types of agriculture.

“I think a lot of the houses at the higher levels — after the first level — would be at risk for some damage. I hope they would not be damaged, but I think they are at risk,” Bishop said.

He recommended the installation of guttering around the roofs of the houses, the construction of proper drains and the planting of grass in the area.

Bishop quoted a 2006 study done for the Ministry of Agriculture, in which Professor Nazeer Ahmad identifies the soil type as “chaufleur clay loam to clay”.

The soil type is the only one of its kind in St. Vincent, and is located mainly in the south and southwest coastal areas, up to 300 meters.

Ahamd said the soil has “imperfect drainage and moderate permeability; it is stony and boulder at all depths.

“It occurs at about 100m on moderately steel to steep slopes. This is the only soil in St. Vincent with vertic properties i.e. clay texture, firm consistence, sub-angular blocky texture and shrink-swell behavior,” the professor further said in the 2006 study.

Bishop told I-Witness News that “shrink-swell behavior” means that the soil “shrinks in the dry season, swells in the wet season”.

“Therefore, if I or you were to do anything on that soil, whether it is cultivation or construction, we should know what are the properties in order to manifest what we have in the proper way,” he said.

He noted that in the report, Ahman said he sampled the subsoil down to 60 centimeters (two feet).

“… over the last several hundred years, people had realized that this soil was not a soil for cultivation — because of its physical properties — nor for construction,” Bishop said.

He said that the village of Clare Valley sprang up in 1902, and the whole area was an estate, that was later bought by the government.

“When [the previous owners] had it, there was no cultivation there. In those days, the major crops cultivated were arrowroot, sugar cane and cotton. Nothing was on that particular site. Why? Well somebody would have had to know something,” Bishop said.

He said one of the earliest documents to speak about this soil type is a 1958 book called “Soil and land-use surveys. No. 3, St. Vincent”, written by J.P. Watson, J. Spector, and T.A. Jones of the then Imperial College of Tropical Agriculture in Trinidad and Tobago.

“Anyone who has any work to do in soil and land use, whether you are an engineer, agronomist, or whatever, has to refer to a document like this,” Bishop said.

“This document spells it out also,” he further told I-Witness News, adding that the book gives a profile of a different site where the same soil type is located.

He said that while the sample referred to in the 1958 book was taken in Prospect, there are deposits of the soil type from Prospect to Buccament Bay/Layou, representing 3,014 acres spread across that area.

The 1958 book also says that the drainage of the soil is “imperfect”.

“That is the characteristics of these soils,” Bishop said, citing the index of texture, “which really classifies a soil whether it is sand, silt, loam, or clay or a mixture of in between…

“If you were to go exactly to the site, … a profile just on the road above where that house fell, a profile of about three feet, you could pick up a ball of clay in your hand … And you will see in the profile what they said here: stony and boudlery at every level,” Bishop said.

He told I-Witness News that the land is not recommended for farming except to be left under permanent crops, such as cocoa, coffee, sugar apple, sour sop, mango, tamarind, and grass grown among the trees.

Bishop said that with climate change, the rainy season could be rainier than before. “Not that you will have an increase in the annual rainfall, but the intensity rainfall will change so that you will have 100 millimeters in a very short space of time,” he explained.

“And, because of the imperfect drainage, and the characteristic of the soil to swell, when you put all those factor together, the soil will swell and tear,” Bishop said.

He reiterated that Ahmad said the subsoil of that type is “extremely hard and compact, almost impossible to auger”.

“If you ask these people down there — people who saw their house [being built] — if they were drilling before the piles (columns) where set, they will tell you no.

“So you put all these things together, it means that to construct there will be extremely costly and extremely difficult because of the subsoil,” he said, adding that when constructing on this soil type, the builder has to drill down to the rock, and even into the rock to set a foundation properly.

State should have expertise

Asked why he did not comment publicly before, Bishop said he was in and out of St. Vincent when the project was developed and did not think that the government would have built houses so far up on the hillside.

“One would have assumed that the state, in doing something, would have all the expertise at their disposal — people who knew about these documents, people who use it in their daily work. I use it in my daily work. They are supposed to be doing it, and there are well-trained persons there who would advise them that is not impossible to put a housing scheme here, but it has certain things that you have to do to ensure that you mitigate against the hazards…”

Bishop said that when there is vegetation on soil, because there is evapo-transpiration, the water in the soil is less than if all the vegetation is removed, as is largely the case in Clare Valley.

“There is nothing to evaporate that water fast enough. So you have an imperfect drainage, the soil will have more water for a longer time than if you had vegetation.”

He further said the soil deposits is not homogenous.

“It is not homogenous, so you do not know where you would have a lot of boulders, few boulders, a lot clay; it is uncertain. It is not that every square foot of land you would not be able to build a house somewhere. But then you would have to find exactly which areas is what, and to treat it properly, you would have to put in a lot of drainage. Everything speaks about the erosion hazard…” Bishop said.

Bishop visited the area on Saturday, but had also visited it about four times before.

“I remember going there with somebody from housing on two occasions when they were just going up the slope, and when I looked, I said to myself, ‘This soil is not going to hold so much you know.’

“If you go there now, you can see water percolating from the higher areas to the lower areas even under the roads that are built. And one has to ask, how sustainable is that?”

Bishop recommend that the areas of the country where the 3,014 acres of this soil type is located should be “mapped properly, identified for each surveyor, each engineer, each agronomist, … even the institutions that are lending money, to avoid investing monies in these areas, because we have a lot of areas in St. Vincent we can build on.

“And we have not exploited the space up. We are still spreading out. … We have to be very careful in development in this country, in island likes these, especially with climate change and these things. Once the knowledge is there, we should utilize it,” Bishop said.

He also recommends that proper drainage be installed to mitigate against further damage and that construction cease in the higher areas.

Bishop said guttering should be placed around the roof of each house, and the rainwater, if it cannot be stored, be funneled into a large drain and into the river below the project.

None of this, Bishop said, should be at homeowners’ expense.

“So you could avoid that water getting into the soil and so reduce the amount of water that the soil will have to bear for a while. That would be something that I would recommend.”

Bishop further said he thinks the structural integrity of the house, in terms of the depth in which the column were placed, contributed to the collapse.

He said that at a house close to the one that collapse, the step leading from the road to the house has already separated from the house, and the owner said that didn’t take place the same day when the one collapsed.