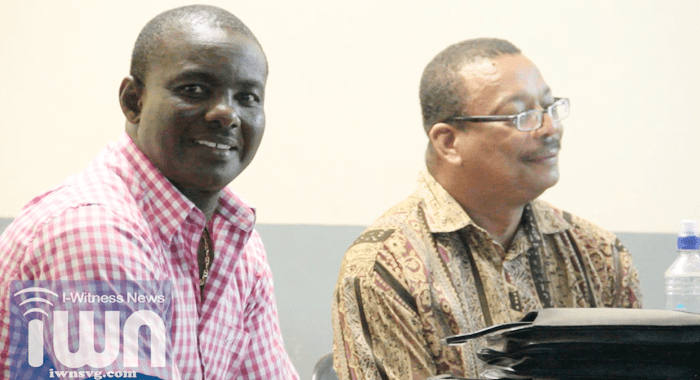 Homeowners at the state-constructed housing project in Clare Valley on Saturday demanded and received apologies from the Housing and Land Development Corporation (HLDC), one week after a house collapsed at the development.

“Let me first of all say to you that the HLDC deserves the licks that we are receiving. I listened to you attentively. I looked at the video slides and I think your concerns are genuine concerns,” Chair of the HLDC, Beresford Phillips said, as he responded to a homeowner’s demand for an apology.

“I listened to the concern of poor customer service, and I myself, having come from a customer service-oriented business, I do not take that lightly,” Phillips, a businessman, said towards the end of the meeting, at which homeowners listed a litany of complaints about the houses for which they have mortgages of at least EC$130,000.

Homeowners had complained that their two- and three-bedroom concrete houses were shaking, about poor and no drainage, poor finishing, and poor customer service from the front desk staff when they visit or contact the HLDC’s headquarters in Kingstown.

“As early as next week, Monday to be precise, I am summoning a meeting of the management of the HLDC to discuss the issue of customer service,” Phillips said, adding that the state-owned agency has been discussing other issues related to the collapse of the house in Clare Valley.

“I take customer service very seriously, and we have some talking to do next week. I want to apologise on behalf of the HLDC for the behaviour, Kevin, that you receive from our front desk. And I believe on you next visit to the HLDC, you will discover a different attitude, and if it doesn’t happen, you call me,” Phillips said to Kevin Young, who seemed especially offended by what he described as poor customer service at the HLDC.

“So again, let me on behalf of the HLDC apologise to you, homeowners, for the way you have been treated in relation to your investment.

“I said to the people at Green Hill, a home is a lifetime investment and every effort must be taken to ensure that your home is secure. And, as far as the HLDC is concerned, from here on, I believe to my heart that we are going to improve the supervision, because that’s one of the problems — poor supervision; because, if we had proper supervision, in a lot of cases, the contractors couldn’t do what they like. So, again, I apologise, and we will try from our end to improve the relationship between the HLDC and you homeowners,” Phillips said.

Phillips told the homeowners that he was glad that they had raised their concerns and had formulated themselves into a committee, so that they can speak with one voice.

And, General Manager of the HLDC, Elvis Charles also apologised to the homeowners, saying, “I, too, would like to say how sorry I am for what really transpired at Clare Valley a couple weeks ago.

“Many of you would have complained to the HLDC about your problems and I think now, more than ever, we are going to look into your concerns very, very quickly. We are going to do whatever we can to make you comfortable whenever you complain to us,” he told homeowners.

“I would just like to repeat one thing about what happened to Kevin. I would like to apologise for what happened at the front desk, and, as the chairman said, we are going to do everything possible come Monday to see how best we can improve the relationship not only with you here at Clare Valley, but with everyone who comes to HLDC for help, and has to do with the construction of houses,” said Charles, who came to the meeting wearing short pants.

The apologies came at the end of a town hall meeting organised by homeowners and attended by Minister of Housing, Montgomery Daniel, and Minister of State in the Ministry of Works, Sen. Julian Francis.

Constituency Representative for South Leeward, Nigel “Nature” Stephenson, an opposition lawmaker, and the ruling Unity Labour Party’s candidate for South Leeward, Sen. Jomo Thomas (who has represented some homeowners legally before becoming a senator in September 2013), were also among the persons who attended the meeting.

The houses, all of which are concrete, were constructed under the ULP’s housing initiative, and a three-bedroom house belonging to physician Katisha Douglas collapsed on Sept. 19.

Douglas and her daughter lived in the house, but no one was at home when it collapsed.

Prime Minister Ralph Gonsalves has said that poor engineering, poor drainage, and the type of soil were responsible for the collapse of the house.

The government has said that it will reconstruct a house for the Douglases, and that it will correct the problems in each house in the area.

Daniel told the meeting on Saturday that the government has already identified lands at another place in Clare Valley, should experts recommend that any of the houses be demolished.