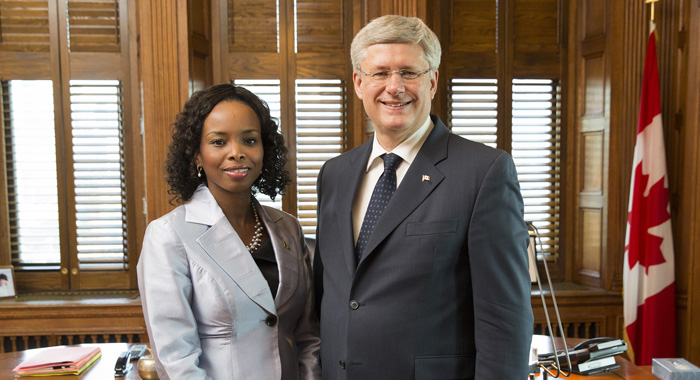 WASHINGTON, DC — St. Vincent and the Grenadines (SVG) now has a High Commissioner to Canada.

SVG was last represented at the level of High Commissioner to Canada by Brendon Browne, who served with concurrent responsibility for all OECS countries from 2007 until the closure of the OECS High Commission in September 2011.

In presenting her credentials, the Prince emphasised the value and importance that SVG places on the relationship with Canada, thus the decision of the government of her country to reinstate diplomatic relations at that level, albeit via a non-resident high commissioner. Prince, whose substantive duties remain that of Ambassador to the United States of America and Permanent Representative to the Organisation of American States, will continue to be based in Washington, D.C, while serving as non-resident High Commissioner.

As with the Consulate of SVG in New York, which falls under the jurisdiction of the Embassy of SVG in Washington, D.C., so too will the Consulate of St. Vincent and the Grenadines in Toronto, headed by Consul General Fitzgerald Huggins, fall under the purview of the Office of the non-resident High Commissioner.

During her one-day trip to Ottawa, Prince also met with representatives from the Ministry of Foreign Affairs of Canada to discuss the mutual expectations and aspirations for the bilateral relationship between SVG and Canada. Meeting with Julia Wayand, deputy director for the Latin-America and Caribbean Division, and Senior Desk Officer Daniel Bood, the Prince flagged SVG’s interest in securing greater trade opportunities with Canada, outside the framework of the current negotiations of the Canada-CARICOM Free Trade Agreement (FTA), particularly via municipal chambers of commerce. She also identified the need to have further and more elaborate engagement on Canadian immigration and deportation policies, as well as the visa restrictions to which SVG is now subject.

For their part, the Canadian officials signalled an interest in facilitating dialogue between SVG and several Canadian companies with expertise in renewable energy, who are particularly keen on working in the Eastern Caribbean. They indicated that the Canadian government and private sector have followed with keen interest, the policies and thrust of the government of SVG on the question of renewable energy, and recognize the rich scope for collaboration between both countries in developing SVG’s tremendous potential in the area of renewable energy. The officials also enquired about the level of recovery of SVG following the devastating Christmas trough of 2013.