NGO disappointed with region’s response to Year of Family Farmers 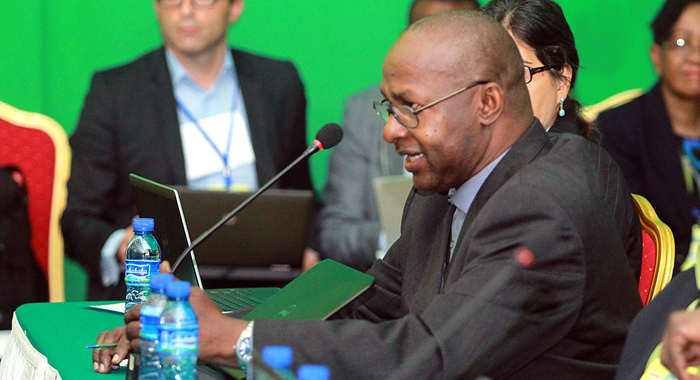 PARAMARIBO, Suriname — The head of a regional network of small farmers has expressed disappointment with the region’s response to the International Year of Family Farming.

The United Nations has declared 2014 the International Year of Family Farming, in an effort to highlight the potential family farmers have to eradicate hunger, preserve natural resources and promote sustainable development.

“All over the world, we are invited to seminars about the international year; prime ministers, presidents, everybody pushing agriculture. But, within the region, the international year of the farm family has been received with lukewarm feeling, a reflection of how low agriculture is still on the scale of priorities in the region,” Jethro Greene, chief co-ordinator of the Caribbean Farmers Network (CaFAN) told a meeting of CARICOM’s Alliance for Sustainable Development of Agriculture and the Rural Milieu (The Alliance).

The Alliance is a grouping of representatives of stakeholders involved in agriculture and rural development.

The representatives of governments, private sector, academia, rural women, youth and technology developers dialogue as equals, with the ministers “first among equals”.

“There has been no focused programmes regionally, and even a lot of national programmes do not exist and we may have given it a glancing talk here at CWA,” Greene said.

“But it is basically a reflection, and most disgraceful, of the way we have taken an international year of farm family, which gives us an opportunity to put agriculture and farm families at the centre, and we lose out on that and call ourselves pushing agriculture forward.

“It is a contradiction and I am disappointed,” Greene said.

Greene said in an interview that CafAN attempted to set up a regional committee to plan for the Year, but did not have that mandate.

He said the group has asked farmers to observe World Food Day, Oct. 16, as “World Food, Farmers and Fisherfolk Day”.

“Bring everything of our farmers to the forefront, to recognise them. We want schools, we want everybody to recognise our small farmers,” he said, adding that CaFan is developing a regional project focusing on sustained, profitable market access for rural farm families.

A CARICOM official, when asked separately to respond to Greene comment, said she could not do so at the time, since she did not have at hand information on regional activities to mark the Year.

Greene comments came days after Dr Deep Ford, coordinator Caribbean region — United Nations Food and Agriculture Organisation told a workshop at CWA that family farmers “have played their role phenomenally well” and have been “the backbone of the food systems and our food security across the region”.

Ford said the United Nations decided that family farmers must be recognized, hence the international year.

Ford, however, said that more than recognition, it was year that the UN wanted to ensure that “we focus on reconfiguring the public policy frameworks that impact family farmers, and perhaps more importantly, bring to family farmers the rewards for all that they have given over many years to their countries…