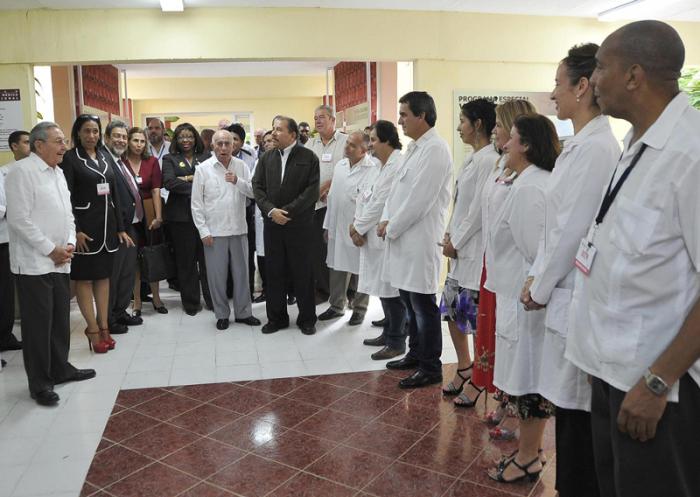 Prime Minister Ralph Gonsalves says that St. Vincent and the Grenadines, like the sub-regional Organisation of Eastern Caribbean States and the larger CARICOM bloc, is unprepared for the Ebola virus, which has claimed more than 4,500 lives in West Africa, and has now reached the United States.

“In the case of St. Vincent and the Grenadines, we have been taking some measure and so too within the Organisation of Eastern Caribbean States, and also in CARICOM.

“But the truth is this: we are very unprepared for this disaster, this crisis, this spread of Ebola,” Gonsalves said Monday in Cuba at the ALBA Extraordinary Summit to deal with the Ebola epidemic.

During the summit, among other things, the Bolivarian Alliance for the Peoples of Our America –Peoples’ Trade Agreement (ALBA-TCP) agreed “To look after, as a priority, the special needs of our sister countries in the Caribbean that would allow them to benefit from the cooperation for preventing and confronting Ebola that are agreed to by the ALBA-TCP countries.”

Gonsalves told the summit that he believes that Cuba is the only Caribbean nation that is prepared for the possible arrival of the virus.

Cuba on Wednesday dispatched 91 doctors and nurses to Liberia and Guinea and has 256 medical workers to Sierra Leone to help combat the Ebola virus.

Havana has put 461 doctors and nurses into specialist training for a six-month mission to the affected countries. Cuba has so far dispatched the largest number of medical professionals to help fight the virus.

Gonsalves noted that St. Vincent and the Grenadines is an archipelago with airports on five islands, seven seaports, and 12 points of entry for yachts.

The Prime Minister also told the summit that SVG has a population of 110,000, has 82 doctors, including six Cubans, 800 nurses, 35 public health workers, 250 nurses and nursing assistants in training, one major hospital with 205 beds, five rural hospital, one polyclinics, and 39 clinics.

He further pointed out that because SVG is an archipelagic state, which historically has a good maritime sector, it means there is a lot of traffic between the islands

“So, it’s a phenomenal challenge,” he said, and expressed gratitude to Havana for accepting SVG’s request to help with training the relevant professionals.

Gonsalves said SVG has done some training and is conducting checks at some points of entry.

The students had arrived in the country over a three-week period, but did not have a medical certificate proving that they were not infected with the Ebola virus.

Nigeria, where several cases of Ebola had been diagnosed, has since been declared Ebola free.

Gonsalves said that amidst the Ebola crisis, Washington and Geneva must be mindful that “one size can’t fit all” and must devise special, concrete arrangements for small states that are archipelagos.

He said what is being done in Cuba is a tremendous signal to the world that ALBA is providing leadership, and that Cuba and Venezuela are in the vanguard of the fight against Ebola and want to work together to try to keep the region Ebola free, while helping in countries affected by the virus.

Gonsalves said he wanted to put on record his support and that of his government “for the intimation of Fidel in his recent article for the US and Cuba to work together on this matter, among other countries in the world”.
A communiqué issued after the summit, said that, among other things, the ALBA countries agreed to coordinate their efforts to prevent and deal with the Ebola epidemic, including rapidly providing and using assistance among our countries, with healthcare workers and relevant supplies and materials.

The meeting also agreed “To contribute to the training of health care workers specialized in the prevention and control of Ebola in the ALBA-TCP countries and the Caribbean, on the basis of accumulated experience” and “To create a cadre of professionals from different specialties to train healthcare workers in the areas of biosafety, including the use of personal protective equipment to be used for suspected or confirmed cases of Ebola, care of haemorrhagic diseases and critical patients, that might become facilitators and advisors in their respective countries.”