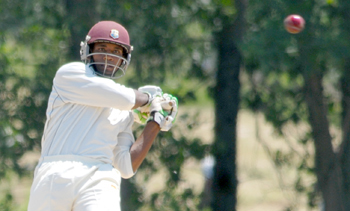 Declaring on their overnight 379/7, the Vincentians were made to toil on the good batting track in steamy conditions but eventually dismissed their opponents to gain a lead of 110 and added a further 61 before play was called off.

The visitors were given an indication of the long day ahead when St. Lucia’s opening pair of discarded West Indies T20 player Johnson Charles (19) and Taryck Gabriel (63) had raised 59 for the first wicket before Charles was caught by Kenneth Dembar off pacer Dawnley Grant.

Dalton Polius (18) and Gabriel took the score to 97 before Polius was taken by Kesrick Williams off the left-arm spin of Alston Bobb. It was 119/3 when Gabriel went, taken by Romel Currency off the bowling of Dembar. He struck eight fours. Skipper Craig Emmanuel (28) then added 78 for the fourth wicket with the attacking Keddy Lesporis (86). Emmanuel edged a leg break from the bowling of Keiron Cottoy to wicketkeeper, Lindon James.

It was a period when the Vincentians moved into the ascendancy as three wickets fell for eight runs, with Alex Antoine (2) and Jason Simon (0) quickly following Emmanuel back to the pavilion off the bowling of Bobb. Lesporis then found a willing ally in Larry Edwards (42*) and the pair added 44 for the seventh wicket before Lesporis, whom the Vincentians thought was more than a bit fortunate to have survived a few LBW calls, was eventually given out that way from a quicker ball by Cottoy. He struck 6 fours and 2 sixes.

With a lead of 110, SVG then took some batting practice and ended with Gidron Pope on 38 and Miles Bascombe on 11 to reach 61/0.

The Vincentians, on being asked to bat on the opening, had reached their imposing total on the backs of half centuries by Donwell Hector (97), Romel Currency (85) Bascombe (67) and Cottoy (58).

The match at the Mindoo Phillip Park ended in a no decision owing to rain after Dominica had made 276 on the opening day with captain Lim Sebastien getting 127 and Kevin James 36 as left-arm spinner Denis George taking 5/51.