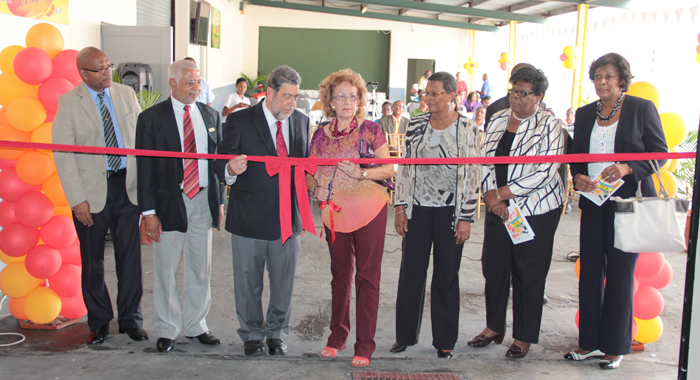 Officials looks on as Chair of ECBI, Audrey DeFreitas, prepares to cut the ribbon at the opening ceremony. (IWN Photo)

“What are the spin-offs of the re-opening of Ju-c? We have engaged or employed some 40-plus people, during this festive season, we will see further circulation money, there will be increases to the NIS and the P.A.Y.E. division. In all, it will be a contribution to increase our GDP, which, in my term, is nation building,” Davy said.

Juc-C, a carbonated soft drink, is being offered in six flavours, including ECBI’s own special cola, which was formulated in-house.

“For all of us, today is a momentous day in St. Vincent,” Davy said, adding that it was a great feeling to be reopening Ju-c one month before the Christmas holidays.

“For Vincentians, it is a new source of pride; it is nostalgia in a bottle. Our children will now be able to experience the taste of Ju-c. We brought back just for you,” he said.

ECBI acquired the assets of the financially-troubled Bottlers (St. Vincent) Ltd., in April, several years after the company ceased operations.

Audrey DeFreitas, chair of ECGC board of directors, said the decision to acquire Bottlers Ltd., was a hard one for director of ECGC to make, “as it meant moving away from our core business and entering into uncharted waters…

“… However, the CEO Mr. Davy and his team convinced the board that this acquisition would not only add to the company’s portfolio but will also contribute to the building of the national economy by increasing employment while contributing to the social development of our country.”

DeFreitas said that as chair, she now has “renewed vision for ECGC, which is to be the producer of choice in the OECS for the food and manufacturing and processing sectors, setting and delivering standards of excellence in quality customer service, employee empowerment and shareholder value”.

Prime Minister Ralph Gonsalves, delivering the feature address, said that the project took longer that he hoped but he was pleased with it.

He said he and his government has been active in supporting the venture, after the former owners of the company had a lot of financial difficulties and their bankers closed in on them.

He, however, said that “in order to get off the starting blocks” he had to personally authorise certain kinds of waivers from the previous company “even in their dying days to make sure that something could come out of the ashes”.

The government’s director on the ECGC board was given clear instruction to support the acquisition, Gonsalves said, adding that he knew that the Viera family was very much along the same line.

The government and the Veira family, combined, are the majority shareholders of the company.