Mother of missing woman strengthened by faith in God (+Video) 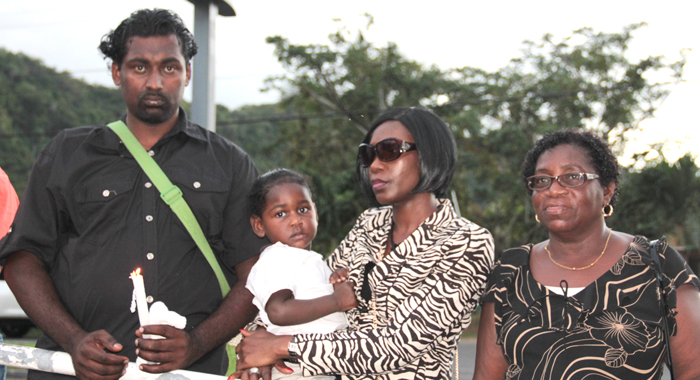 The mother of one of the three persons missing since and presumed dead as a result of the Christmas Eve 2013 trough system says she has found strength over the past year in her faith in God.

“For the last year, I looked to God for everything. He says he will never leave us nor forsake us and he says that his grace is sufficient for us, so I always look to my Bible and turn there for answers, no matter what the world may say,” Patricia Browne told I-Witness News on Wednesday –Christmas Eve.

Browne’s daughter, Jozel Morgan Small, 27, of Rillan Hill/Lowmans is believed to have been swept out to sea in Buccament Bay by floodwaters as she and other co-workers made their way home from work at the Buccament Bay Resort on Christmas Eve.

A trough system that night triggered flash floods, which claimed nine lives, while Small and two other persons, Sheila Edwards, 36, and Inka Jack, 12, both of Buccament Bay remain missing and are presumed dead.

Browne spoke to I-Witness News near Marty’s Gas Station in Cane Grove, where a candlelight march culminated after a national interdenominational service of remembrance at St. Mary’s Anglican Church in Pembroke, a neighbouring community.

(Scroll for interview with Mrs. Browne and Mr. Small from New Year’s Day 2014)

The body of Keslia James, 18, of Cane Grove, who was swept away by flood waters, was recovered near the gas station on Christmas morning last year, while the body of James’ 2-year-old niece, Shalarni Headley of Canada/Cane Grove was found nearby one day later.

The comments by Browne on Christmas Eve suggested that over the past year she had come to accept that her daughter might be lost forever.

“December last year, when everybody came by me, they meant that they should meet me breaking down or something like that.

“And I said no, my God said he will never leave me nor forsake me and I turn to the Bible. I thank God for my church family, they helped me along the way. So I will continue to hold on to God. As the Bible says, there is a time to live and a time to die.

“She is gone before us but it has the time when we will go too,” Browne told I-Witness News.

Meanwhile, Morgan-Small’s husband, Ricky Small, was too distraught to comments as he wiped fresh tears from his eyes as his mother-in-law gave the interview and as he watched persons lay candles in memory of the dead and missing, while he held a lit candle in his own hands.

Browne and Small were standing at the vigil in the company of Browne’s daughter, Dianna Browne, and the Small’s son, who turns two years in January.

During the memorial service, Small also wept as Maxwell Charles, minister of national reconciliation and MP for Central Leeward, where Buccament Bay is located, read the names of the dead and missing.