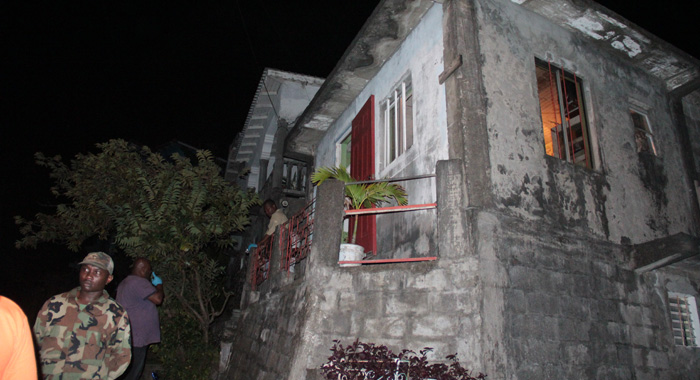 The shooting took place in this building in Upper New Montrose. (IWN Photo)

An Upper New Montrose (Monkey Hill) man was shot and killed and his son injured Wednesday night as Vincentians prepared to ring in the New Year, bringing the murder count for 2014 to 38.

Elcas James, who is in his mid-50s, died on the spot, and his son, Shawphiel Moore, who is in his early 20s, was shot and injured by a masked assailant around 8:20 p.m.

Police say that Moore was hanging out with some friends in the area then went to his father’s shop to collect Bambu cigarette paper.

After collecting the paper, Moore was accosted by the assailant, who shot him in the right side of the neck.

The assailant then discharged several rounds into the shop, killing James on the spot, police say.

Police took Moore to hospital, where he was being treated, but his condition was not known up to midnight Wednesday.

Police have not offered any theories for the attack but have launched a murder investigation.

The 38 murders this year, is a new annual record, replacing the previous record: 36.