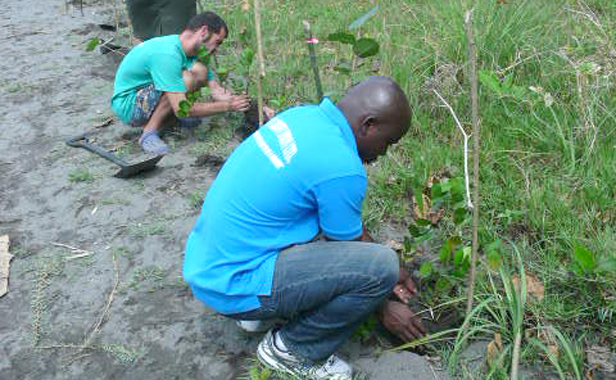 Over 100 “fat pork”, Neem and sea grapes trees have been planted at the Richmond seafront under a project dubbed, “The Richmond Coastal Conservation Initiative”, a partnership between the Police Cooperative Credit Union, the Department of Forestry, Richmond Vale Academy and National Parks, Rivers and Beaches Authority.

The plants are intended to stabilise Richmond Beach and to help prevent further erosion.

President of PCCU Junior Simmons said the event formed part of activities to mark the union’s 12th anniversary, which is being observed under the theme “The PCCU in retrospect, introspect and prospect: building on a solid foundation”.

He said that the PCCU is happy to partner with the other institutions in putting in place defensive measures to mitigate further erosion at Richmond Beach, which has been battered by numerous storms over the years.

Simmons told the gathering that the challenges and effects of climate change are no longer a distant threat to our way of life and flora and fauna, but it has come home in Richmond and other parts of St. Vincent and the Grenadines, therefore, precautionary measures are necessary.

He stated that the effects of rising sea levels, storm surges and severe flooding in the Richmond area seriously impacts on the residents’ livelihoods because the beach is a vital source of economic activity and sustenance for them.

Simmons stated that the trees planted will be nurtured by all of the stakeholders until they reach maturity. He called on the residents of the area to play a role in ensuring the plants survive and thrive.

He said this can be done is by not tethering animals in the area where the trees are planted.

Joel Poyer, a forestry officer at the Department of Forestry, stated that over the years, he has been fighting to get Richmond Beach back to how it used to be. To this end, he said the project makes him feel a lot better.

Poyer said Richmond is a heritage of St. Vincent and the Grenadines because there are numerous activities that transpired there in terms of livelihood for the residents including fishing, and he catching of tri-tri.

Poyer said that that with the Richmond Coastal Conservation Initiative, he is confident that Richmond would be restored to what is was before.

Selwyn Patterson, a teacher at the Richmond Vale Academy, said that the Academy is a happy stakeholder in the project.

He said the academy has been planting trees since 2013 and has joined hands with partners throughout the world to plant 100 billion trees.

He highlighted the academy’s Moringa Tree planting drive and its first place position for the smallest country that participated in the United Nation Tree-lympics. Patterson said the December 2013 storm severely eroded the road leading to the Richmond Beach because there were not sufficient buffers to slow down water; hence, the planting of the trees is to minimize the effects of similar occurrence in the future.

One reply on “Groups plant 100 trees at Richmond beachfront”