Geothermal energy in SVG will be game changer 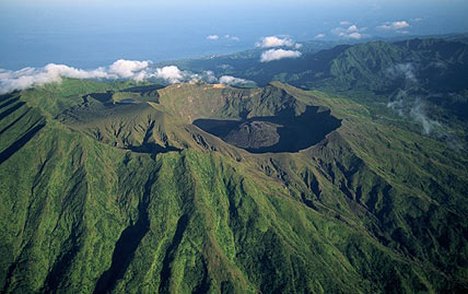 Explorations for geothermal energy are taking place along the Windward slopes of the Soufriere volcano.

St Vincent and the Grenadines (SVG) should pursue geothermal energy exploration and development.

A couple of years ago, SVG’s Prime Minister Ralph Gonsalves announced the government’s intention for geothermal energy exploration deep within the La Soufriere Volcano and describe the new phenomenon as “a game changer”.

All things being equal, this 50 million dollar project can indeed change the aspect of growth and development in SVG.

The Caribbean and many other regions of the world, according to the Union of Concerned Scientists, are currently tapping geothermal energy as an affordable and sustainable solution – an alternative energy source to the dependence of the conventional fossil fuels, and the global warming and the public health risk associated with this conventional energy source.

From 2013, 11,700 megawatts (MW) of large, utility-scale geothermal capacity was operational worldwide, with another 11,700 MW in planned capacity for the coming years. It was reported that these geothermal plants generates around 68 billion kilowatt-hours of electricity, enough to meet the needs of more than 6 million typical US household for a year. These scientists further claimed, the geothermal facilities in El Salvador and Iceland account for more than 25 per cent of the electricity produced in those two countries.

Considering these potentials, undoubtedly, SVG is should pursue this energy source, not only in its quest to reduce conventional practices, but a strategy to boost the country’s economic growth while reducing electricity bills, and considering the country’s volcano and geographical location, are definite reasons to move ahead.

In fact, the scientists’ claims about geothermal resources matched the potentials of SVG. Beneath the Earth’s crust there is magma — a layer of hot and molten rocks. This layer continually, generates heat, generally from the decay of naturally radioactive materials in the form of uranium and potassium. Remarkably, within 33,000 feet of Earth’s surface contains 50,000 times more energy than that derived from all the oil and natural gas resources found globally.

This is not all.

The union reported that the regions with active or geologically young volcanoes are typically the areas with the highest underground temperatures. These “hot spots” prevail at plate tectonic boundaries or at locations where the crust is thin enough to allow heat through.

Similarly, geothermal energy is also found in regions seismically active. In this capacity, the motions of earthquakes and magma crack the rock overlay, which allows water to circulate. As the water upsurges to the surface at 200 degrees Celsius, geysers and hot springs are materialized.

However, with all these potentials, SVG still faces enormous challenges and must develop relevant parameters: investment and financials, facility management, profitability and technical know-how vital to success of the project. In fact, SVG could learn from Jamaica’s aluminium, Guyana’s gold and Trinidad and Tobago’s natural gases and their daunting economic situations despite all these natural resources.

This sustainable development would ensure that the government’s plan involved a compromise to meet the needs of the present and acquiring future generations to reach their own needs.

At the core of this issue is investing in human resources at management and technical levels – ensuring Vincentians are employed in some of the senior positions, especially in managing operations, finance department and the technical areas of the facilities — sustaining employment and education.

Furthermore, this project is already deemed profitable considering that this energy source will replace electricity powered by diesel fuels and the fact that neighbouring Barbados is a potential customer, will be serviced through 100 miles of undersea pipeline. Considering all these phenomena, the government must borrow and invest more than half in the total cost of this project and invite local and even regional business entrepreneurs to invest, allowing SVG’s economy to grow through the profits plan.

In addition to this, geothermal exploration in SVG could help the International Energy Agency (IEA) achieved its goal — to increase the amount of geothermal energy in the global energy mix from approximately 0.2 per cent to more than 3 per cent by 2050.

Nevertheless, this initiative by SVG would be an important contribution to the global efforts at reducing carbon emissions and utilising geothermal as a sustainable and reliable energy source, which does not fluctuate.

If SVG can utilise this resource correctly, geothermal energy investment could answer the pressing issues associated with SVG’s current economy. Furthermore, it can rescue the economy from the warning signs of climate distress and volatile fuel costs.

One reply on “Geothermal energy in SVG will be game changer”