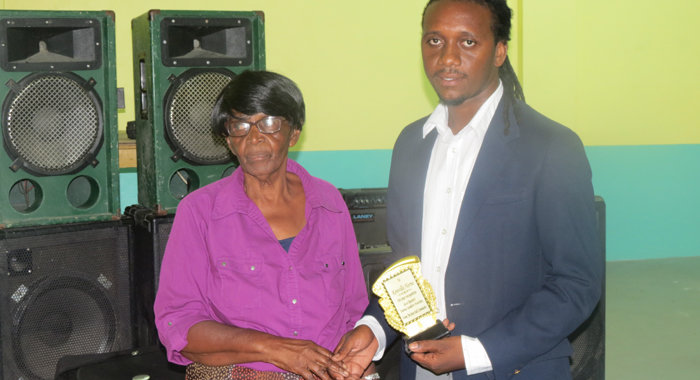 Vincentian Commonwealth Queen’s Young Leaders Award winner Kenville Horne has been recognised and celebrated in his community of Rose Hall.

Horne is among 60 young persons from the Commonwealth –only six of whom are from the Caribbean –to be recognised by the Queen’s Diamond Jubilee Committee for their outstanding service to their communities.

As a result of winning the award, he was offered an online course from the University of Cambridge, and will travel to the United Kingdom in June for a residential stay, during which time he would receive his award from Queen Elizabeth II at Buckingham Palace.

Community activist and businesswoman Anesta Rodney, MBE said that from a tender age, Horne was destined to find a life for himself.

“I am happy, happy, real glad for Fonando,” said Rodney, using he name which Horne is affectionately called in the community.

Rodney said Horne has a big heart. “He has grown to be a little man and a big man at the same time, with ambition and because of that we are sitting here in this hall tonight” she said.

Horne, a journalist, is the son of Bellmar Horne of Rose Hall and former police officer, Osborne Phillips of Bequia.

Rodney, in her tribute, said that Horne is always on the go, and moving with ambition.

She traced Horne’s early upbringing and highlighted his rough past, noting that he could not have run up the ladder, but instead toiled in his book.

“And today I am sure that Fonando did not regret it,” said Rodney to loud applause.

The Community activist also highlighted the contribution made by Clare Valley resident, Aliena James, who financed Horne’s education at the Community College.

While he was an employee at the Division of Physical Education, Horne started the Kenville Horne Sports Academy for disadvantaged and at-risk youths in the community.

Rodney said that Horne left Lowmans every week to train the children in Rose Hall.

“And we say thanks to him. Rose Hall is proud of you,” she said.

“On the basis of what he is doing, someone recommended him for the award,” she added, and implored Horne to remember where he came from and to remain humble.

“Humility is there to guide you,” she said, before presenting him with an award for his outstanding achievement.

Rodney thanked Carlos James, the Unity Labour Party’s candidate for North Leeward, for playing a pivotal role in the ceremony.

Tribute also came from community activist and member of the Rose Hall Drummers, Sellywn Patterson. Patterson said he knew Horne from since he was a little boy and that he felt proud of his accomplishment.

Another community activist, Hayden Ferdinand commended the young man for his achievement and dedication towards North Leeward and SVG as a whole.

James also paid tribute to Horne before presenting him with an award.

In his response, Horne expressed thanks to everyone who came out to show support, Aliena James for sending him to the Community College, and to James for his support.

He said the trials and tribulation that he endured inspired him to make a difference in other people’s lives.

Horne encouraged the youths to remain humble and show respect and pledged to continue to give back to his community.

“I will continue to represent Rose Hall and to do whatever I can to make the community proud,” said Horne to a roaring applause.