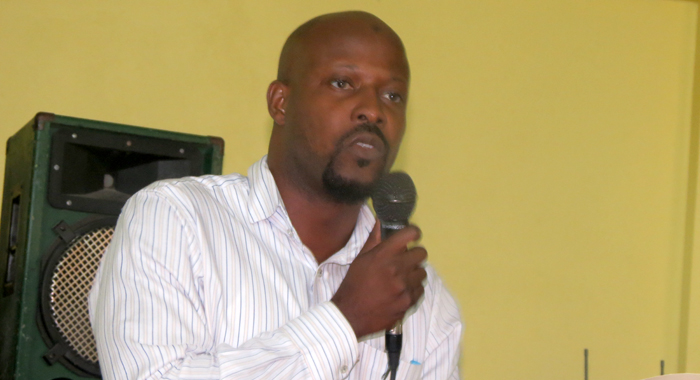 Carlos James, the ULP’s candidate for North Leeward in the next general elections.

Lawyer Carlos James, the Unity Labour Party’s (ULP) candidate for North Leeward in the next general election, has outlined some of his developmental plans for the constituency.

He spoke at a town hall meeting in Rose Hall, said to be the first in a series of such meeting planned for the constituency.

James said his emphasis in North Leeward would be the education policy of his party, developing the agriculture sector and preparing the youths for the job market.

He told the gathering that he intends to work with young people, by providing training and educating them using information communication technology, job readiness workshops, and other initiatives, such as the Youth on the Block initiative.

“This Youth on the Block Initiative is focusing more on vocational programmes to sort of enhance the expanded education programme that the government has,” James said.

He also spoke about his plans for agriculture, saying he would like to see the depots in the constituency being managed properly.

James appealed to farmers to form co-operatives to be involved in the management of the depots.

He said there are plans to refurbish the fisheries complex in Chateaubelair and the agriculture depots In Belmont.

“… but it’s important that we have farmers on board to form cooperatives to manage these depots,” he emphasised.

James spoke extensively on the on-going rehabilitation of feeder roads and the distribution of over 12,000 banana plants in January. “These things are part of the rehabilitation programme for agriculture and banana,” he said.

The Troumaca native said he would also focus on empowering young people so that they could go forward, and he believes that job readiness training is vital in this regards.

He said that eight ladies from North Leeward were selected for an agro-processing programme and were given EC$5,000 to begin the programme and thereby contribute to the economy.

In the 2010 general election, Matthews, a former teacher, defeated the incumbent, Jerrol Thompson of the ULP, a physician, who was seeking a third consecutive term as Member of Parliament for North Leeward.