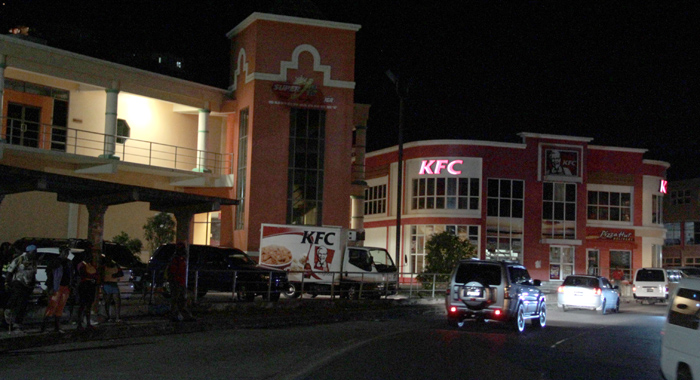 “I got into a little bit of trouble, not with the KFC, but with the building at Arnos Vale. I jumped ahead and tried to beat the new city, and, quite frankly, I haven’t gotten it rented as I thought,” Boyea told I-Witness News on Monday.

Boyea was speaking about the EC$16 million investment at Arnos Vale, where in 2010 he opened the second branch of Aunt Jobe’s Market, the country’s largest supermarket, which he has since sold.

The property includes a 120-space underground parking lot,  and a mall with space for rent for shops and restaurants.

Boyea, a self-made businessman who was SVG’s Entrepreneur of the Year 1996, told I-Witness News on Monday that he has hit a difficult patch financially.

The problem has come as the proposed city at Arnos Vale has not materialised, four years after the E.T. Joshua Airport was expected to be decommissioned.

The delay has come as the Argyle International airport, which was expected to replace E.T. Joshua Airport in 2011, is yet to be completed.

“It’s been difficult and KFC has had to meet the mortgage payments and it’s a bit much to ask. So, every now and again we are running out of products and not doing the franchise any good. So I have been looking for new investors. So, in the meantime, the bank has sent in the receiver to look at it and so we can look at where we go from there,” Boyea told I-Witness News.

“It’s a pity it looks that way, but KFC in fact is a good business,” he said of the “closure”.

He said a company wanted to rent the upper storey of the building, but the company’s staff had reservations because their children attend schools in Kingstown.

“Arnos Vale isn’t ready. It is good for a supermarket because people pass through and they stop and it is a nice and convenient. As a matter of fact, the sales in the supermarket is doing well,” Boyea said of SuperJ, a regional chain that replaced Aunt Jobe’s.

Boyea told I-Witness News that one of the local medical school wants him to hold the building until June, by which time they are hoping to increase their enrolment from 98 to 200 students.

He said the school wanted to rent the building, but he had problems with their request to install a freezer to store cadaver — human corpses used in teaching medicine — since there is a supermarket and KFC outlet are nearby.

“We have to look for refinancing, because, quite frankly, I thought I had more time. The banks have a buyer or something so they are pushing me,” he said.

“I thought I would have had time until June, but, quite frankly, I spent over 16 million dollars building Arnos Vale and I thought with the new city I was ahead of the game. As a matter of fact, I was too far ahead of the game. The new city was supposed to start about 2011, about the time the airport should have been finished, but the airport isn’t.

“The long and short of it, [there is] nothing wrong with KFC and its franchise. What’s wrong is the franchisee was a little bit too ambitious and delved into new things,” he told I-Witness News.

Boyea said that while has 32 million dollars in real estate, liquidating them in the current circumstances is a challenge.

“… when you get into these situations, everybody wants to get them for nothing. I have 32 million worth of property. The money I made with KFC, I used it to buy property, and that is what is so hard. The KFC people who help me to do that, I don’t know exactly.

“I am hoping I get refinancing in a short while. But my present bank seems to be in a hurry to sell it to somebody else. I am trying to fight that. But they have brought in a receiver to manage it for a couple of weeks and see whether we can refinance.”

He said the receiver will over the next two days examine the situation “to see how badly we are off”.

“They will come up with recommendations like cut some of the staff. I am not the person to do that because I have had that thing for 28 years,” he said.

Boyea told I-Witness News that he had lunch with some of his staff on Christmas day and a 38-year-old woman noted that she has been working at KFC since she was 17.

“So it’s difficult for me. … Maybe I have been there for too long, maybe I need a change. I can’t fire people. What happened is that when we opened the third store, it coincided with building the mall at Arnos Vale and it was difficult because the third store is doing well but it took away some business from the one up at Customs,” he said in relation to KFC Uptown (Kingstown).

“We used to do 12 and a half million dollars a year in two stores and when we built the store at Arnos Vale, we expected to go to sixteen and a half, but instead of that, it went to fourteen and a half. And by right I should have been cutting staff, but, as I said, I have a lot of long-term employees and I didn’t,” he said.

He told I-Witness News that while he was able to rent the supermarket space at Arnos Vale, things did not go as plan with that operation after the sale of Aunt Jobe’s and, as a shareholder, he agreed to reduce the rent by $20,000.

“And it is only now going to go back up, and, quite frankly, I couldn’t afford it because I’d spent a lot of money. As you see it has underground car park — I spent 16 million dollars, not including the land.

“The mortgage I have is too big for KFC to carry and I’m now trying to push my rent back up now that Massy has taken over (SuperJ) from the St. Lucians.

“I won’t give up the KFC. The KFC is a bread and butter,” Boyea said.