ULP to buy building after failing to pay rent since 2011 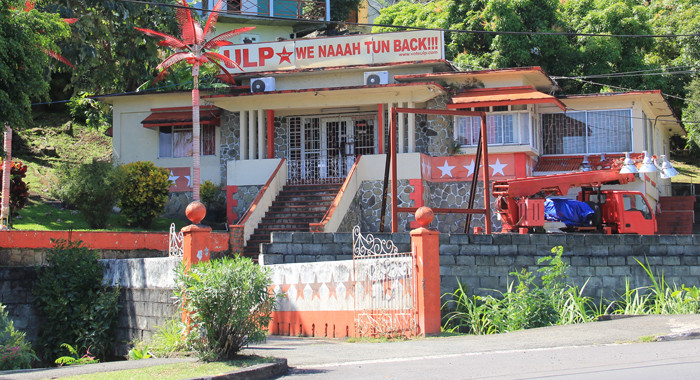 The building on Murray’s Road where the ULP headquarters are located. (IWN photo)

The Unity Labour Party says it will purchase the building on Murray’s Road where its headquarters is located, for which it did not pay rent since 2011, resulting in an eviction notice last week.

Prime Minister and Political Leader of the ULP Ralph Gonsalves announced the party’s intention to purchase the building on Saturday at a rally to mark the party’s 14th anniversary since coming to office.

“I see a piece of mischief in a newspaper about the ULP had to leave their office. I am telling you, ULP ain’t leaving no office,” Gonsalves said.

“Even before Julian get the letter, I don’t understand how a lawyer letter written to Julian reach the newspaper before it reach Julian. I really don’t understand that. That is why I call it a piece of mischief,” he said.

A copy of the notice was also sent Gonsalves, the party’s leader.

“… last week Tuesday, the person who Julian was paying rent to for the office, he paid a substantial amount of money and told the man that by Monday or Tuesday, whatever the arrears would be paid,” Gonsalves said.

“But I want to tell you this: nobody do mischief on De Comrade like that. We had an agreement to buys the property. Today, I spoke to the gentleman who owns the property, and the Unity Labour Party will be buying the property. That is all I want to say about that,” Gonsalves said.

He, however, did not tell party supporters why the party had failed to pay its rent for such a long period of time.

I-Witness News understands that the ULP, which took office in March 2001, initially leased the building in 2007 for one year with option to renew the lease. After the lease expired, the party began renting on a monthly basis but defaulted in payments for years.

Bacchus-Browne has said that at the time of preparing the Notice to Quit, the ULP owed her client $96,000, but subsequent to that her client gave additional information which upgraded the amount owing over $100,000.

She told I-Witness News Friday evening that the party had paid “almost half” of the amount and had asked for one month to pay the remainder.

She said her client had demanded that proposal in writing.

The lawyer told I-Witness News on Monday that she did not want to comment on Gonsalves’ statement about the ULP purchasing the building.

Bacchus-Browne did confirm that the building was up for sale, but declined to comment on how long it has been on the market.

She said she was preparing a letter to send to the ULP and would comment after it has been sent.