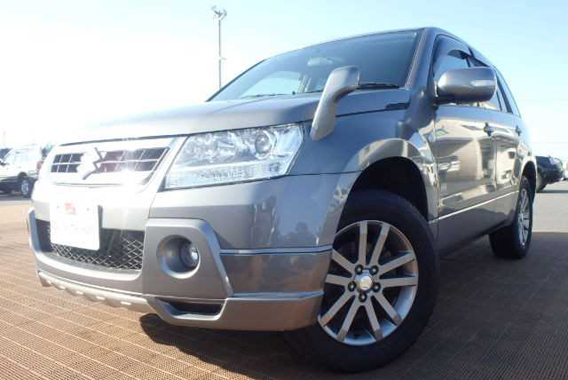 The vehicle was a 2005 Suzuki Escudo — NOT vehicle shown.

No laws were broken when Comptroller of Customs and Excise Grenville John paid cost, insurance and freight (CIF) of US$6,500 on a 2005 Suzuki Escudo he imported earlier this year, Prime Minister Ralph Gonsalves said, citing a report from John’s superiors.

But officials at the Customs are moving against a Customs Officer whom they suspect of leaking the information to the media that triggered questions about the importation of the vehicle.

“I understand, I’ve been advised that it is alleged that someone at the Customs, a Customs officer, provided the initial information to someone in the media and that has been reported by the authorities at Customs,” Gonsalves, who is also Minister of Finance said in response to a reporter’s question on Tuesday.

“Of course, I don’t get involved in matters concerning these international administrative business. That’s for departmental head and Public Service Commission … I am usually clear as to what my role is, and I wouldn’t want to comment on that, just to say that that is one consequence. My views, generally speaking, are known on these sorts of things,” he said.

When the story broke in February, John had said he was “confident” that he knows who leaked the information, adding that doing so is a violation of the Customs laws.

“The fact that someone disclosed information on an importer is a violation of the confidentiality provision of the Customs laws,” he said.

The US$6,500 in CFI that John paid on the vehicle was based on a bill of sight, rather than an invoice.

In keeping with his grade in the Public Service, he was granted a 75 per cent waiver of import duty, VAT and excise duty on the vehicle.

Leader of the Opposition Arnhim Eustace in February called for a prompt investigation into the importation of the vehicle even as persons in the vehicle import business said the vehicle was undervalued by more than 50 per cent.

Others suggested it is actually a more recent model that 2005.

Gonsalves, speaking at a press conference on Tuesday, said that after the development appeared in the media he instructed Director General of Finance and Planning Maurice Edwards to inform John to provide a written report.

The Prime Minister, who is also Minister of Finance, said he received a detailed report containing statements from the Comptroller and other Customs officers, with a covering letter from the Director General of Finance and Planning.

In the cover letter, Edwards said that “having perused all the documentation, he’s satisfied the Comptroller of Customs did not breach any Customs law nor did he act in any manner which compromised his integrity,” Gonsalves said, noting that he was paraphrasing.

Gonsalves said he shared the report with the Cabinet in the presence of the Director General.

“I read the entire report, all the statements, and they were lengthy statements, some of them. I asked one question of the Director General, and I said to him, ‘Why did not the Comptroller of Customs — even though he was not obliged to — show the documents which transferred the money for the purchase price, whether in one or two tranches; why didn’t he append that to say this is what was paid?’ “I was told by the Director General of Finance and Planning he doesn’t know the answer to that,” Gonsalves said.