NDP launches campaign with promise to turn around economy 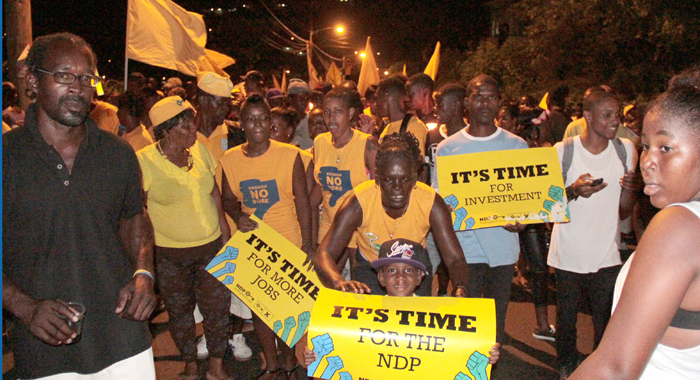 The main opposition New Democratic Party (NDP) kicked off its campaign for the next general elections Saturday night with party leader Arnhim Eustace telling party supporters that a change in government is needed to rescue the nation’s economy.

At a march and rally in Sion Hill, Eustace, an economist and former prime minister and minister of finance, continued his long-running focus on the nation’s fiscal situation, and accused the Ralph Gonsalves government of mismanaging the economy.

He said that under the Unity Labour Party’s oversight, scores of privately- and government-owned businesses across the country have either closed or downsized.

“All of those businesses have downsized or closed because of the state of the economy under Ralph Gonsalves. That’s why they are closed today, and that is one good reason why we have to get rid of him. So, ralph Gonsalves, you are gone, you are gone,” Eustace said.

He said that the list of businesses that have closed or downsized is much longer than he mentioned, adding that it does not include establishments in rural St. Vincent and the Grenadines.

Eustace outlined the impact of these developments on the financial wellbeing of Vincentian families.

“There are plenty more people who used to work who are not now working; many more families are suffering because there is no income for their families. And when the Prime Minister boasts about welfare, welfare is nothing to boast about. You boast when you get jobs for people,” he said.

Eustace suggested that the situation can be remedied by a change in administration.

“I believe that the people of St. Vincent and the Grenadines, with proper government, can do much better than they are doing today.”

He also criticised the government’s management of the national budget, saying that while the tourism Authority was supposed to get EC$13.4 million last year to do its marketing, it only received EC$3 million.

“So when you see our tourism is not performing, part of the reason is that the government is broke. They cannot give to the institutions the money which they should … Ralph Gonsalves has mashed up the finances of the country and he will continue to unless we move him.”

Eustace said the government could have found EC$6 million to fund its “Vote Yes” campaign in support of the proposed changes to the Constitution in 2009, but cannot find the money to disburse to the Tourism Authority.

“I give you that assurance, the New Democratic Party will manage the resources of this country with care and with concern.”

Last year, the government budgeted EC$330 million to do projects, and it boasted about what it will fix or build, including roads, Eustace said.

“Out of the 330 million, when December came last year, … they only spent 141 million. Think about that… So how are you going to get jobs?

“I can’t tell you how serious this matter is, and why it is vitally important that you put people in office who understand these issues, who can manage these issues, and make sure that the benefits come to the people of St. Vincent and the Grenadines.”

Eustace also reiterated that an NDP government will be tough on corruption and will use foreign forensic auditors to investigate suspected cases of corruption.

“There will be no commission of inquiry. There will be forensic auditors and if you are caught, you pay the price. I am tired of this nonsense and it is getting worse and worse,” he said.

General elections are constitutionally due in March 2016, but are widely expected this year.

Observers say that the race will be a straight contest between the ULP and the NDP.

The ULP is seeking a fourth, consecutive term in office, having secured a third term in 2010 by a single seat majority.

But Eustace expressed confidence that his party will win the support of the nation’s young voters in its bid to return to government.

“Tonight is a special night; very special night. When I came up with the crowd from the headquarters, I could feel the change that is taking place in St. Vincent and Grenadines,” he the event in East Kingstown, which he has been representing since 1998

“I saw the joy on the faces of the many young people that came up that hill this evening. And I say to Ralph, goodbye,” Eustace told the crowd, which included the ruling Unity Labour Party’s candidate for East Kingstown, Luke Browne, who came to the rally decked in his own campaign’s t-shirt.