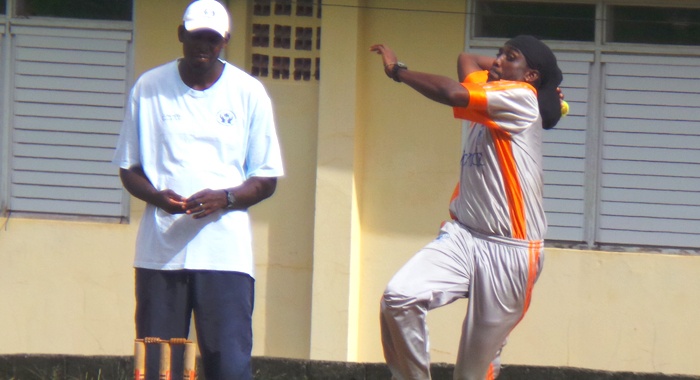 Owia Young Strikers and Smashers advanced to the quarterfinals of the St. Vincent Police Co-operative Credit Union Clinchers T20 cricket competition with comprehensive victories over their opponents at the Richland Park Oval on Sunday.

In the first match, Owia Young Strikers won the toss and asked the lawmen to take first use of the wicket in dry but hazy conditions.

The big-hitting Roderick John and Trevor Martin opened for the Police team and looked to be on their way after finding the boundary on a few occasions early in the piece.

John, who struck 2 sixes in his topscore of 15, was the first to go when he was caught of the bowling of Denson Lavia with the total on 21.

Kevin John went without scoring and Randy Yorke 1 as the Police did their now patented “cricket wine to the ground” with wickets spread out and stumps doing acrobatics in a display that would not have been out of place on stage at Soca Monarch.

After the opening pair, only Colin Stay, who batted at number five, and remained unbeaten on 5 remained steadfast and refused to join the conga line.

When the carnage was thoroughly examined after 13.1 overs, it showed that Police were dismissed for 38 with scores of 15,11, 0, 1, 5*, 2, 0, 1, 0 and 1-combinations that would probably be noted with glee by the avid and possibly addicted Lotto players.

Zimroy Baptiste picked up 4 wickers for 3 runs with 3 of his victims having their stumps disturbed, while Randel Munroe hand 3 for 5 and Denson Lavia 2 for 1.

Owia Young Striker strode to the crease with great confidence but were given a scare with a fusillade from Osrick James that had stumps strewn all over the place.

He picked up 4 for 11 — bowling all his victims. Dill Clarke (14) was the topscore but he too was conquered by James.

The victory was achieved in 7.2 overs with Owia Young Strikers ending on 39/4.

In the second match, Smashers recovered from the bothersome position of 10 for 3 to post 127 in 18.2 overs after being asked to by CGM Gallagher Novice.

They then dismissed the defending champions for 80 in 18 overs for a victory by 47 runs.

Smashers, who have been one of tournament’s most pugnacious teams, are renowned for fighting themselves out of tough situations and on Sunday were again in evidence as they rallied with a series of middle and lower order partnerships as well as the poor catching of Novice.

Set 128 to stay in the competition, the defending champions stumbled out of the blocks and never regained their balance.

Travis Peters (4/10) created the early problems with none of the batsmen even coming close to getting on top on the bowling.

In the end, the defending champions went out with a whimper in 18 overs.