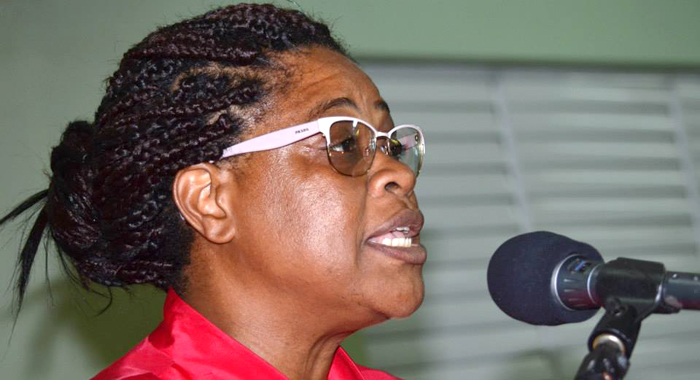 The ULP Deborah Charles is the only woman selected to contest the next general elections in SVG. (Photo: Lance Neverson/Facebook)

The only woman selected so far to contest the next general elections in St. Vincent and the Grenadines has identified “several barriers” to women entering politics at that level.

“Our cultural norms and values and the critical nature of a woman’s role in the family, are only but some reasons why men far outnumber women in formal ‘representative’ politics,” Deborah Charles, the Unity Labour Party candidate for West Kingstown said on Sunday at her party’s Women’s Arm convention.

She, however, said the reasons she identified do not take away from the sterling contributions women have made in the political arena across the Caribbean and in SVG.

“Women continue to inspire and more and more of us continue to pick up the mantle of representative politics,” said Charles, a first-time candidate, who will contest again the New Democratic Party’s Daniel Cummings, who is seeking a second consecutive term

Charles, a teacher, said the has always recognised women “as equal contributors to the development and growth this country.

“We have never hesitated to put women in positions of authority and decision-making. Throughout the public service and in government statutory entities, women hold top positions,” she said, adding that the ULP is the only administration in SVG that has appointed three women to top foreign diplomatic posts.

They are La Celia Prince and Rhonda King, ambassadors to the united States and the United Nations and of former ambassador to the UN, Margaret Ferrari.

“Our own woman of labour, the Honourable Rene Baptiste is serving us proud as the first elected speaker of the OECS Assembly,” she further said.

She noted women’s prominence at the forefront of commercial activity.

“We are a significant part of the agricultural sector, the fisher-folk, the vegetable market vendors; we were and still are the mainstay of the traffickers who trade agricultural produce to Trinidad, Barbados and the smaller northern islands.

“Women are merchants and retailers; we are hoteliers and agro-processors; we are professionals and are well represented in the services sector. We are our nurses and doctors, police officers and councillors. Women are not just from the rib of man but we are the backbone of the family structure and, therefore, the backbone of society.

Vincentians will before yearend elect a new government ahead of the March 2016 constitutional deadline, Prime Minister Ralph Gonsalves said told the convention.

Charles called on women supporters of the ULP to make a fourth term in office a reality.

“Women were and continue to be a chief ingredient in the glue that keeps the fabric of our party together. The women of labour have always made it happen,” she said.

“The ULP has a lot of good work to defend. We have worked hard to ensure a brighter future for us, our family and generations to come. We cannot allow anyone to kick over the bucket of milk. We have more good work to do and we have to ensure that we make it happen. We have to deliver the victory. 4 in a row!” Charles told the convention.