SVG beat Dominica in ‘away leg’ of Olympic Qualifiers 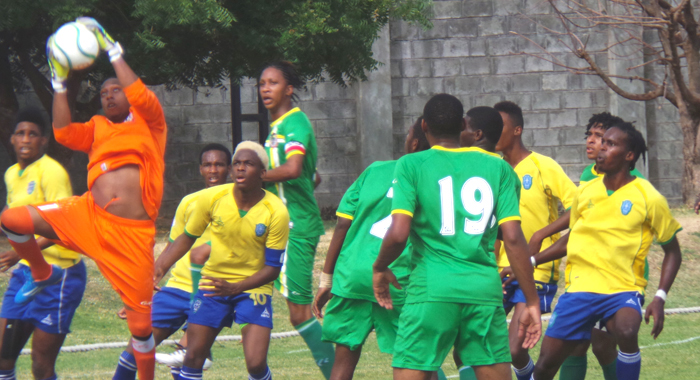 St. Vincent and the Grenadines, on the back of an own goal and a penalty by Oalex Anderson, beat Dominica 2-0 in the “away leg” of their Under 23 Olympic Qualifier at the Arnos Vale Playing Field on Friday, but for a number of missed chances could have come away close to 5-0 victors.

The second leg, which will be the Vincentians’ “home game”, will be played on Sunday at the same venue from 3:30 p.m.

SVG are hosting both legs of the Qualifiers following a request from the Dominica Football Association owing to international cricket being played in that country.

On Friday, with the success of winning the WIFA men’s championship still fresh in their mind, the Vincentians started the game briskly, clearly with a point to prove.

Their attacking options enhanced with the return of Anderson from his MLS Division Two, SVG made a series of early excursions in the Dominica area with Vasbert Ledger, Kyle Edwards and Tevin Slater proving to be a constant threat.

But it was Dominica who made the first foray on goal when the diminutive Derrickson McDonald, collecting a pass from Afenee Frederick, skipped passed one defender before, in a state of near panic, the SVG defence got the ball over the line for a throw.

SVG duly went ahead in the fifth minute in the freakish of ways when defender Malcolm Joseph attempted to intercept an aerial ball with his head only succeeded in lobbing goalkeeper Elijah Toulon, who had left his line.

SVG, buoyed by the fortuitous go ahead goal, then set about making inroads into the Dominica defence with both Anderson and Slater having opportunities to extend the lead. The chances began to appear with more frequency and so too the disbelief, exasperation and frustration of the small but enthusiastic crowd. Slater, who found himself in the best of positions to score, found every opportunity not to, with what can be described as extremely poor finishing.

On 18 minutes released by Edwards, Slater found himself with an empty goal but could only sidefoot his shoot past the near upright. A few minutes later, sent on his way by Kevin Francis, Slater shot wide of the mark. But while the buzz and screams of incredulity were still audible, the striker rounded Toulon and, with the goal bellowing his name, the player, instead of easily placing the ball into the open goal, went for the option of hammering the ball into the net. The look of disbelief on every face at the ground could possibly be worth an entire book. The wastage did not markedly impact the Vincentians, who continued to find a way through their opponents’ defence.

The half-time sore was SVG 1- Dominica 0.

Both teams made a few changes at a certain period during the second half, but it was still SVG that held the position strength with the one goal advantage, the possession and chances.

With apparent tiredness setting in for both teams, the play got a bit scrappy with turnovers mostly in the centre of the field, but it was still punctuated by the now come to expect missed chances by Slater and company. He was eventually substituted in the 59th minute with Dennis Prescott.

And it was the pacey and skilful Prescott who occasioned SVG’s second goal when collecting a pass on the right side of the field in the 89th minute, he ventured into the box after evading a series of tackles only to be brought down by goalkeeper in a desperate last gasp and clumsily attempt. Initially, referee Leo Clarke was seen waving away the appeal by the Vincentians but was forced to give the spot kick as his assistant had waved for the infringement.

The dyed-blond hair Anderson, who had scored his first goal for the Sounders FC Two last week, coolly stepped up and expertly put the ball out of the reach of Toulon, who was fortunate to remain on the field with only a yellow card for the offence. SVG’s Deno John was the other person to receive a card in the match for a two-foot tackle in the 51st minute.

The 2-0 win by the Vincentian was welcomed by assistant coach, Wade “Elbir” Jackson, who, despite being disappointed by the number of missed chances, felt that the team had done what was required: chalk up a win.

“We did not convert a number of chances and it is something that we will once again have to look at, but all in all, the team played a good level,” he told I-Witness News in a post-match interview.

Slater had been the main culprit in failing to put away any of his plethora of goalscoring opportunities and Jackson felt a great level of sympathy for the player.

“I can understand his situation with the type of work he does then having to come to play for the national team.], it is not easy.”

Jackson pointed out that it is easy for players who experienced such a wretched game as Slater had to lose confidence, but the management team will sit and have a chat with the player and make him feel comfortable for the next game on Sunday.

“He is going to start again on Sunday because we know what he is capable of doing. Players will have these type of matches, so you have to reach out to them.”

On Sunday, Dominica will first have to overturn the two-goal deficit then add a third to advance to the next round of the competition.