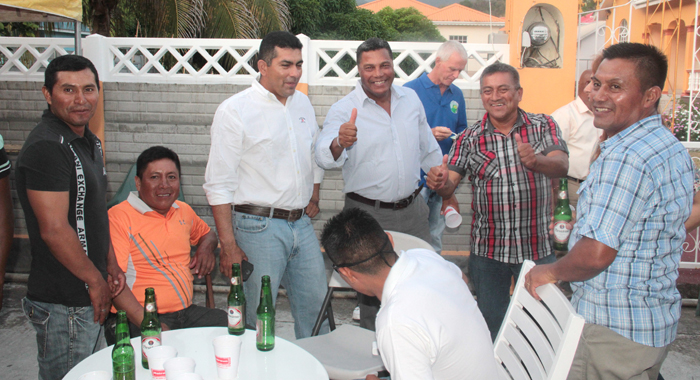 Members of Ecuador’s Army Corps of Engineer at the farewell dinner on Saturday. (IWN photo)

The Cane Grove Neighbourhood Watch (CGNW) hosted a farewell dinner last Saturday in honour of the contribution made by the Ecuadorian Army Corp of Engineers who are building four bridges here.

The engineers, who have been in the country for some eight months, will on June 23 hand over to the government four bridges that they re-constructed in the aftermath of the 2013 Christmas floods and landslides.

One of the bridges is located in Hope, Penniston, upstream from Cane Grove, and the engineers also did work on the Buccament River, which runs through both communities.

Three bridges are also being built in North Leeward.

The Cane Grove residents expressed appreciation to the Ecuadorian team, “Who through their humanitarian efforts, engineering skills and perseverance, contributed to making the valley of Buccament and the Hope area, in particular, more accessible and safer from the ravages of the river.

“All communities including Hope, Cane Grove, Pembroke and Buccament are likely to feel less trepidation, fear and anxiety when it rains as a result of the new bridge and improvement to channel of the river,” President of the CGNW, Grenville Williams said in a statement.

“In addition to celebrating the physical construction of the bridges and the connection of the various communities, it is envisioned that there will be greater collaboration, cooperation and the establishment of bonds of friendship between the Government and People of St. Vincent and the Grenadines and Ecuador,” he said.

Remarks were delivered by Gonsalves, and Major Manuel, officer in Charge of the Ecuadorian team, Chairman Person of the CGNW Sydney Daniel, and Williams.

In his remarks, Manuel said he was proud of the work undertaken by the excellent team under his command.

The team preserved through the various challenges, kept the faith and will deliver a quality bridge to the residents of the Buccament Valley,” he said.

Daniel expressed appreciation for the contribution made by members of the CGNW in making the evening’s event a success.

Special thanks were conveyed to Mark Lulley for his efforts to making the event a success.

A plaque which read “Thank You, To the Members of the Ecuadorian Army Corp of Engineers, In appreciation of the munificent and invaluable humanitarian assistance in relation to the reconstruction of the Hope Bridge at Penniston, Viva Ecuador” was handed over by Cane Grove resident Kim Punnett to the Ecuadorian team on behalf of the Cane Grove Neighbourhood Watch.