Ecuadorians to hand over bridges on June 23 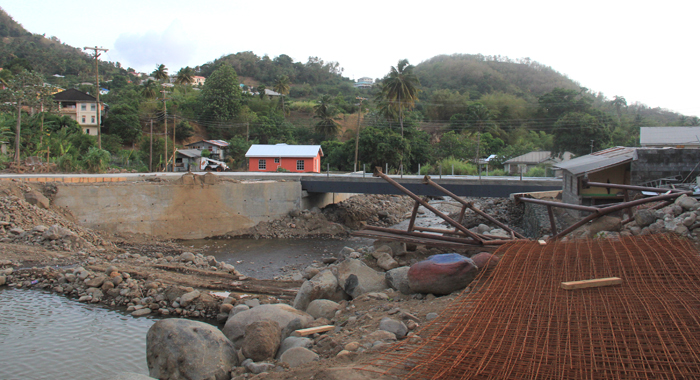 The Hope-Penniston Bridge is the longest in St. Vincent and the Grenadines. (IWN photo)

The four bridges being built by Ecuadorian Army Corps of Engineers will be handed over on June 23, about a week later than schedule.

Minister of Foreign Affairs Sen. Camillo Gonsalves told the media that he met in St. Lucia in May with representatives of the Ecuadorian government and signed the conclusion of a project co-operation agreement related to the bridges.

“They have sent their inspectors to do a sort of a final check on the quality of the work that is being done and to meet with the engineers here and they assure us that the bridges will be complete on the 23rd of June,” Gonsalves said.

He said that the initial estimate for completing the bridges was June 15.

“I wish that all of our infrastructural project can be completed that close to their originally estimated deadline,” Gonsalves told the media.

He noted that at peak the Ecuadorians employed over 100 Vincentians and about 40 are still working.

“Good work is being done on the bridges and they are restoring some of the arteries that were destroyed post flood.”

The bridges, one in Hope, Penniston, and three in North Leeward, were damaged or destroyed by flood waters during the December 2013 severe weather event.

Gonsalves noted the speed with which the South American nation disbursed its pledged assistance.

“I want to point out as well that there are some types of aid and assistance that was pledged to St. Vincent and the Grenadines in the wake of the flood that we still have not received, that are still being processed by this or that government or aid agency,” he said.

“And it is impressive to note that there was a conversation between the head of government of St. Vincent and the Grenadines and the head of State of Ecuador, within a few weeks, they sent a team of people up here to access, within a month or two, the Army Corp of Engineers was on the ground, and now here we are in June … thy are going to be pulling up stakes and leaving,” Gonsalves said.

“It was a remarkably quick, responsive and efficient operation. They promised aid, they sent people, the assistance was disbursed, Vincentian gained skills, gained employment and I think it was a wonderful, wonderful example of cooperation between developing countries and we are exceedingly grateful,” the foreign affairs minister said.

8 replies on “Ecuadorians to hand over bridges on June 23”