‘Vincy Heat’ hoping for better in Guyana after drawing at home 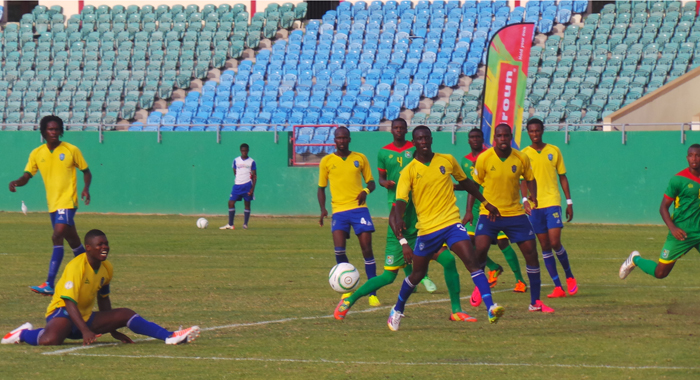 St. Vincent and the Grenadines’ “Vincy Heat” were twice forced to come from behind to draw level and earned a 2 all draw with Guyana’s “Golden Jaguars” at Arnos Vale Playing Field Wednesday in the World Cup Qualifying segment in Round 2 of CONCACAF Zone for the FIFA World Cup, Russia 2018.

The result left both coaches, SVG’s Corneilus Huggins and the “Golden Jaguars’” Jamaal Shabazz nervously approaching the return leg on Sunday at the Providence Stadium in Guyana.

SVG appeared the more confident of the two teams and, aided by the steamy conditions as a result of the 3:30 p.m. start, the pace of their front-runners had the Guyanese on the back-foot from early.

They should have duly taken the lead just after quarter an hour when the Finland-based Corneilus Stewart sped past a number of Guyanese defenders and coming one-on-one with goalkeeper Akel Clarke, could only hit the ball straight to the advancing ‘keeper.

With the crowd shouting its disappointment and still buzzing with the “what should have happened”, Stewart once gain outpaced his markers on the left, cut inside, and did a carbon copy of the first chance, and once again the crowd, including law enforcement officers and “ball-boys” screamed in anguish.

The Guyanese, in the meantime, showing some neat and deft touches, were gradually coming into their own in the midfield with Branford Beresford creating some anxious moments for the home team’s left-side markers. But it was “Vincy Heat” who still looked the more likely to get that opening goal as they ruthlessly exposed the slothfulness of a defence, which was showing signs of the effects from the stifling conditions.

UK-based Gavin James was one of three players who had travelled to SVG to attempt to get into the team and the only one to do so. He was also spoken highly by coach Huggins and made his international debut in this match. It was he who created the third and easiest of opportunities for Stewart just on 20 minutes.

James, collecting a ball from Oalex Anderson and showing good pace and impressive ball control, overcame a sea of green shirts to release Stewart, who once again, with murderous pace, got to the ball ahead of an advancing Clarke, rounded him then, with the goal at his mercy, hammered a left-foot shot over the bar, much to the consternation all his team mates and fans.

The plethora of missed opportunities came back to haunt “Vincy Heat” with telling effect when Beresford, who looked a constant threat, collected a ball about 30 yards out, slithered past two defenders on the porous SVG left side before putting a powerful right foot shot over a hapless Winslow McDowall in the SVG goal to give his team a surprise lead in the 28th minute.

The goal seemed to knock the stuffing out of the home crowd and even the ground announcer SVGFF PRO Earl “Cabba” Bennett whose announcement of “Guyana 1 – SVG nil”, came across more like an obituary than a football score.

“Vincy Heat”, then under pressure with the full knowledge of conceding a very important home goal, continued their attack on the Jaguars’ lair and were denied by the narrowest of margins when Anderson’s curling right foot shot crashed off the middle of the left upright with Clarke helplessly looking on at 31 minutes. But with the players of both teams looking the “worse for wears”, the Jaguars almost sneaked a second goal but Sheldon Holder just pushed his foot wide with McDowall and his defence all at sea.

The visitors maintained their 1-0 advantage up to the break and went in the happier of the two camps.

Kicking now towards the goal at the end of the field known as the Airport End, the Vincentians were soon on level terms in the 51st minute.

Stewart collected a ball in the area of the touchline just above the midway point of the field and with jet-like speed all but embalmed three defenders before slipping the ball past Clarke. The crowd went up in united acclamation, forgetting in a flash the wastage of the striker previously.

Now buoyed by the equaliser and the shouts of the crowd ringing in their ears, the Vincentians began to run their opponents ragged as magical Myron Samuel, the irrepressible Emerald “The Jewel” George the dangerously fast Stewart came into their own. Tevin Slater had been brought in to replace James by then.

The Guyanese, too, had gone to their bench and inserted Ricky Shakes for Sheldon Holder — a change which had devastating effect in restoring the Jaguars’ advantage in the 77th minute.

Euon Alleyne, who replaced Vurlon Mills, collected the ball 25 yards out on the right side found the ever-present Beresford who found Shakes and with signs of nerves coolly guided the ball into the goal.

The ground became as silent as a cemetery and evidence of this was the tone of the mandatory announcement of the score, said as if at the front of a cortege.

St. Vincent and the Grenadines carnival is just weeks away in fact there is music in the air and the feel is present. And three minutes after what appeared the death Nell with the jaguars’ second goal was transformed into a resurrection with blaring of soca music and the goal being announced as if it were being done by Soca Monarch “Fireman” Hooper.

Samuel picked up a ball on the left side of the field outran one marker deftly skipped past two more before laying the ball across for Slater to push a right-foot shot into an open goal. The screams of ecstasy from the females and the grunts from the males was a clear signal that they had all come together looking for a win but were happy for such a climax.

Guyana’s coach Shabbazz was naturally disappointed after giving up the lead on two occasions but was still thankful for the points. He said that the pace of the SVG strikers would be of some concern but was confident that his defence can keep them in check.

He is hoping that the two away goals can be provide them with enough cushion to go into the next round of the play-offs.

Huggins was happy with eventually getting a draw but felt that the match should have been won by half time. He believes that based on what he saw his team was still in with a great chance of advancing.

The writer can be reached at: [email protected]