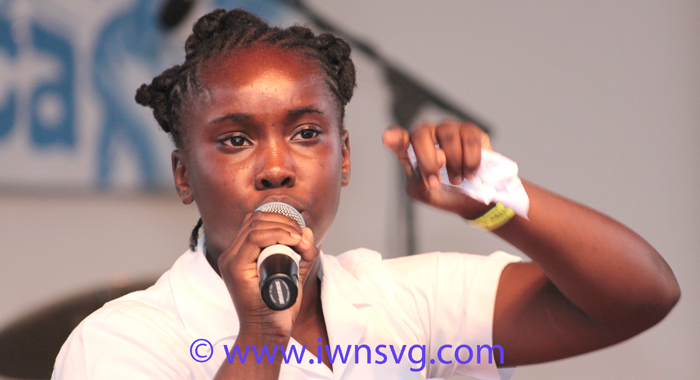 An emotive song about the seven students who died and those who survived the bus crash at Rock Gutter on Jan. 12, left many patrons teary-eyed and won Ishanna Phillips the crown in the Secondary School category of the Junior Calypso competition.

The North Union Secondary School student (NUSS), who uses the stage name “Queen Shana”, struggled through her own tears to complete the song about her classmates who were among the dead.

“My name is Queen Shanna, so I feel like a queen right now because I won first place,” she told reporters after her crowning at Victoria Park on Tuesday.

The first time competitor said she and another of her friends auditioned to represent their school in the competition last year, but the judges picked her friend over her.

But this year, it as Queen Shana who was chosen to render the Hank William composition “Rock Gutter” — named for the area in North Windward where the tragedy occurred.

“People are forgetting about that tragedy so we decided to make a song about it so the judges could feel what I am feeling. And the emotion that I showed is what carried me off and I know I won,” said Queen Shana, who was visibly teary-eyed and her voice wavered during her rendition.

She, however, told reporters that it wasn’t “that difficult” to finish the song, although she “cried a little”.

“I don’t even know. God help me,” she told reporters when asked how she was able to control her emotions and complete the song.

Almost six months after the tragedy, the bodies of two of the students have not been recovered from the sea.

Queen Shana told reporters that students at her school are still finding it difficult to cope.

“So it’s very hard for our class because some of our family members are gone. It’s very hard to cope,” the 14-year-old third form science student told reporters.

Queen Shana outshone Kristiana “Singing Kristy” Christopher, of the Thomas Saunders Secondary who has won several crowns in the competition.

Third was Kelisa “Singing Kelly” Barker, also of NUSS, who sang “Have Some Faith”.

Kristian Christopher of Layou Government  secured the crown in the Primary School category of the competition with his song “Your Attitude Determines Your Altitude”.

He was followed by Cha-Chanie “Lady Cha-chanie” Morgan of New Prospect Primary, with his number, ”Youths We Have To Work Together”.

“It feels good to win,” a reticent Christopher told reporters after his crowning. He said that he was confident that he would have won the competition.

Meanwhile, NUSS also outshone the other contenders in the soca category of the competition.

“It feels great; it feels wonderful,” Singing Kelly told reporters of her victory.

“The song is about being who you are; not trying to change yourself for anybody, just love you for who you are,” said Singing Kelly, who was competing for the first time.

Among the guest artistes at Tuesday’s show were a number of Nigerian dancers. The contestants in the Miss Carival pageant slated for Friday night also made an introductory appearance at the show.