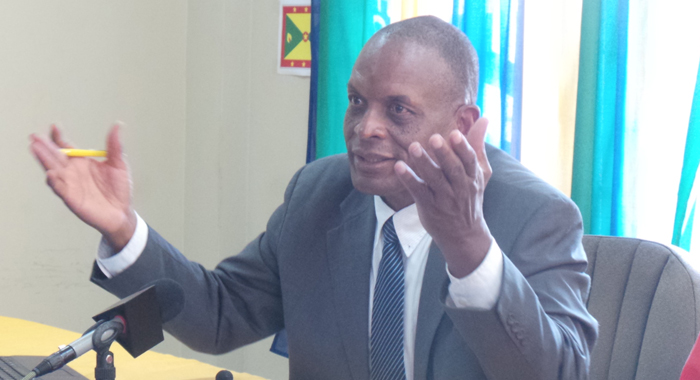 The employing of a foreign coach to carry out the programme of the St. Vincent and the Grenadines Football Federation (SVGFF) will not be done with funds from the body.

SVGFF President Venold Coombs made this unequivocally clear to the media as he gave an update on a number of issues impacting the sport.

He was responding to a question over suggestions regarding whether the SVGFF should look at the possibility of bringing on board a more qualified and experienced coach to assist with the senior team, “Vincy Heat”, which could go through to the next round of the Russia 2018 CONCACAF Qualifiers pending the outcome of a protest lodged by the Guyana Football Federation.

“No way. I see no need to do that based on past experience, in that all you get from these foreign coaches is a lot of expenses and when they leave the game is just as they met it or even worst. I will not be a part of any such thing,” Coombs said with great emphasis.

He substantiated his view by outlining some of the incidents of what he suggested as bad decisions by previous executives.

“The last person we had here as a coach was a total waste of time. He gave just about half an hour a day and spent most of his time on the beach. He was given a fat salary, stayed in rented quarters totalling over EC$3,000 per month. In fact, he cost about twenty thousand dollars a month with no returns.”

Coombs said that when that coach left, SVG were in the 160s in the FIFA rankings and football was at its lowest.

He also mentioned the period under Brazilian Jorge Ramos who was sent to SVG by then CONCACF president, the now disgraced Jack Warner, to take charge of SVG’s Wold Cup campaign in 1996.

“He was not even a football coach as far as I am aware. He was a basketball coach, but just because some worthless people had power, they sent him here to us back then. That is not going to happen again because we have enough knowledgeable coaches here who can help with national teams and we have to believe in local talent.”

He said that the local coaches have all done some work to develop themselves and most have played at the national level.

“Technical Director Keith Ollivierre recently returned from a four-month at the University of Delaware, while senior coach Cornie Huggins has gone overseas to develop himself and others like assistant coach Butu (Wesley) Charles, Under 23 coach Elbir (Wade) Jackson, U15 coaches “Brazilian” (Christopher) Harry and “Morna” (Carlton) Dennie were all part of one of the two CONCACAF D license Courses held here. So our coaches are well prepared to deal with such matters,” Coombs said.

He, however, said that if an “aid package is offered with a technical director as part of that package” that is the only way he will opt for a foreign coach.

Over the years, the SVGFF has employed with limited sucess foreign coaches in the persons of Berteil St. Clair, the team of Adrian Shaw and Ces Podd, Zoran Vranes and Colin Rowe.

Vranes is seen as having been the most instrumental in lifting the local game with SVG reaching an all-time high of 73 on the FIFA rankings under his watch.

They also defeated both Jamaica and Trinidad and played to a tough 0-1 loss to Central American giants Mexico in World Cup Qualifiers.

The president also dealt with the protest by the Guyana Football Federation over the eligibility of UK-based Gavin James and said he was confident that the SVGFF would prevail since, according to him, the FIFA Statutes proved that they had done nothing wrong.

Reading from the letter sent from FIFA Disciplinary Committee, Coombs said that every request for relevant documentation made by FIFA were met within the stipulated deadlines and he had nothing to fear.

The matter has since then been sent to the FIFA Disciplinary Committee for a ruling, Coombs has subsequently revealed.

James is a 26-year-old UK-based striker. Both of his parents and grandparents were born in SVG, and, qualifies for Vincentian citizenship based on his parents’ place of birth.

However, he did not possess a St. Vincent passport at the time of the matches against Guyana. He instead had a stamp in his British passport from the local Immigration Department saying that he was a citizen of SVG.

The GFF is claiming he should have had a SVG passport according to their interpretation of the regulations, while SVG say the stamp is enough.

One reply on “SVG Football Federation staying with local coaches”