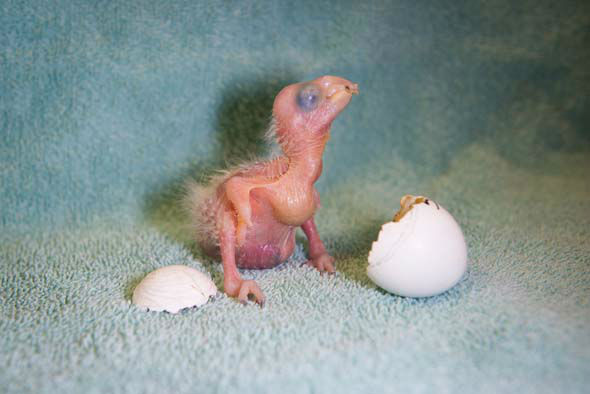 The St. Vincent Parrot, “Mustique Springer”, when it hatched in May. (KTRK photo)

A zoo in Houston, Texas has named “Mustique Springer”, a male St. Vincent parrot that hatched there in May, abc13 Eye Witness News has reported.

The bird is named after the northern Grenadines island, Mustique, and Fitzroy Springer, a man who dedicated his life to the conservation of the species, which is endemic to St. Vincent.

The arrival of the chick is significant in that its mother, Baliceaux — also the name of a Grenadine island — also hatched in captivity.

Mustique Springer is the fourth St. Vincent Amazon parrot hatched at the Houston Zoo and the first male since 1972.

However, it will still be a few years before he makes his public debut at the zoo, abc13 Eye Witness News has reported.

A team of bird keepers at the zoo have been hand raising Springer.

“Life revolves around the chick’s feeding schedule and sometimes you forget to feed yourself! It is very rewarding to know that the chick you are investing so much time in could live for hopefully 40 or more years,” he said.

The news on Tuesday came one week since Minister of Agriculture in SVG, Saboto Caesar told Parliament that 15 St. Vincent parrots sent to Germany under a captive breeding programme in 2011 have paired but were yet to reproduce.

The St. Vincent Parrot (scientific name Amazona guildingii) is the National Bird of St. Vincent and the Grenadines.

It is the only type of parrot in the country and is a large beautiful coloured bird, about 16-18 inches in length.

There are efforts locally and internationally to conserve the parrot, which is listed as an endangered species.