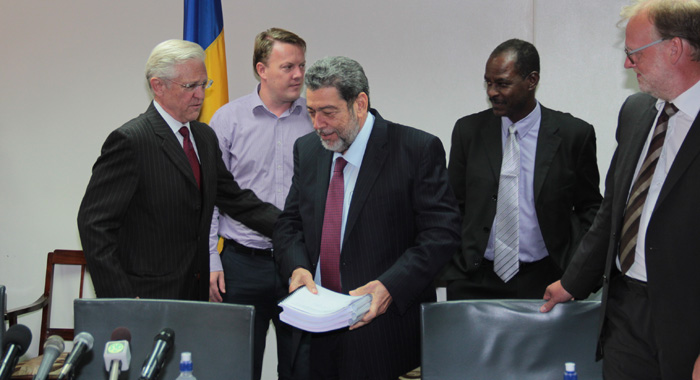 The deal that the Unity Labour Party (ULP) government has signed with foreign investors for the development of a geothermal power plant in St. Vincent and the Grenadines (SVG) is “a sinister plot to enrich people at the expense” of Vincentians, an opposition lawmaker told Parliament on Tuesday.

Daniel Cummings, Member of Parliament for West Kingstown, said the Ralph Gonsalves government has missed the opportunity to plan and implement a geothermal power plant.

The statements by Cummings, an engineer, came during debate on the Geothermal Resources Development Bill, 2015.

In presenting the bill, Gonsalves said it seeks to establish a National Energy Committee and provide for the development and utilisation of geothermal resources in a manner that is beneficial to the country and protects the environment.

The geothermal project  is a joint undertaking between the Government, Icelandic firm Reykjavik Geothermal, and Emera.

The project is expected to be completed by 2018 and should provide the country with 10 to 15 megawatts of energy.

VINLEC, SVG’s state-owned power company, prefers to fund and own the transition facilities for the power plant, which is considered the most practical way to proceed, Gonsalves said.

Reykjavik and Emera will produce the electricity and sell it to VINLEC, which will re-sell it to consumers.

In Parliament on Tuesday, Gonsalves outlined in broad details the various clauses of the bill and said he would respond to lawmakers’ questions when the debate concludes on Tuesday.

But Cummings told lawmakers that although geothermal energy has been bandied about as being a “game changer”, when he listened to the Prime Minister’s presentation, he tried to get a picture in his mind “of what exactly is this game”.

There can be little doubt that, properly done, the exploration of SVG’s known geothermal potential can bring considerable benefit to all residents of the country, Cummings, however, said.

He said he represented the opposition at one of the government-organised consultations and got a first-hand understanding from the consultant.

“And I took away from that consultation a very dark picture of a sinister plot to enrich people at the expense of the people of this country,” Cummings said.

The opposition lawmaker quoted from a July 30 article by Vincentian energy consultant Herbert A. Samuel, who pointed out that in 2001 — when the ULP came to office — the price of fuel was US$20 a barrel.

Cummings said the ULP missed the boat to plan and implement the geothermal power project, saying that the government entered into an agreement with a company purporting to be an expert in the field, but it turned out that the company had no known experience in this regard.

However, between 2005 and 2014, Dominica has made significant strides on its own geothermal energy efforts, including   drilling three exploratory wells, one production well and one re-injection well.

Dominica has also confirmed that it has a geothermal resource estimated at about five times the size of its peak electricity demand, Cummings said.

Cummings noted that the exploratory phase of Dominica’s geothermal power project was paid for with grant funds from the Organisation of American States and the European Union.

“He who pays the piper calls the tune. Clearly, the people of Dominica will be the beneficiaries of the resource that is being utilised in Dominica,” Cummings said.

He further said that under the New Democratic Party administration — which was voted out of office in 2001 — exploratory work indicated that there is geothermal potential in the same area of SVG where the project is being undertaken now.

He said persons estimated that there are hundreds of megawatts of geothermal potential across the country.

“What is required is a proper management approach to ensure that the citizens of this country benefit immensely from this resource,” Cummings said.

He suggested that like Dominica, SVG should have used grant funds to pay for the search and drilling for the geothermal resource.

“It is in that phase and the drilling of the wells that you have the greatest risk, because, indeed, if you don’t get it right, you can drill several wells at tremendous cost and have nothing coming.”

When people put their money up front in a risky investment, their returns are extremely high, Cummings said.

“That is why the people of this country will be saddled with a company coming here, putting its money upfront, and as soon as we start producing electricity the biggest slice of the pie going to them because not only they want back their money, they want it back with very high interest rate; very high!

“That the nature of venture capital. You think I would come if I have a few million dollars unless I know, one, it has a good chance of coming back, and, two, I getting an excellent rate of return?

“That is what this government has done,” Cummings said.

He accused the government of spending money on “frivolous” things, adding that he would prefer if the government takes the state’s money or borrow and invest in the exploration component so that the people of SVG would be the ones to derive benefit from the expenditure.

Dominica went early to the European Union, he said, adding that to get EU funds a country has to put up “a good case”.

“We in this country have not in this country had during the term of this government a good record with grant funds, especially from the European Union and other agencies, because we don’t seem to understand the importance of having a competent team of people to prepare project documents for presentation,” Cummings said, as Gonsalves retorted, “Absolute rubbish!”

The debate continues on Tuesday.