PM says he will ‘sharpen the weaponry’ against MP Cummings 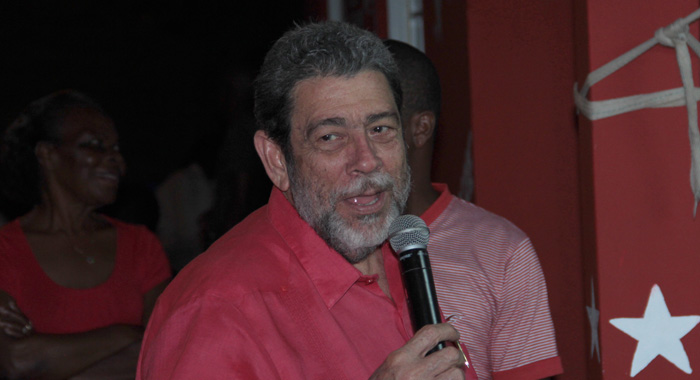 Prime Minister Ralph Gonsalves says he will “sharpen the weaponry” against opposition MP Daniel Cummings who has suggested that Vincentians could pay more for electricity when the US$82 million geothermal power plant is completed.

“Listen to me on Tuesday again. I will sharpen the weaponry against him metaphorically in dealing with the rubbish he talked about the geothermal. A whole set of nonsense,” Gonsalves said Saturday at the opening of his Unity Labour Party’s West Kingstown constituency office at Lowmans Leeward.

Cummings told Parliament on Tuesday that because of the government’s approach to the project, he believes electricity prices could remain the same or even rise after the power plant is completed in 2018.

The geothermal project is a joint undertaking between the Government, Icelandic firm Reykjavik Geothermal, and Emera.

At the media launch of the project in July, Gunnar Orn Gunnarsson, chief operating officer of Reykjavik Geothermal, told reporters that the price of electricity when the project is completed “is something that we are discussing”.

“As the Prime Minister said, there will be a reduc[tion] in power price. How much? We don’t know. The reason being that there are so many question marks out there that we have to answer before we know how expensive this will all be.

“But in the business case we have put forward a likely power price that will be reduced from what we have now in this country but it is too soon to say what it actually will be. That we will answer when we have done the drilling. That depends on how successful the drilling will be. That will determine the power price itself,” Gunnarsson told reporters.

The Clinton Climate Initiative is providing technical assistance to the project, which is expected to be completed by 2018 and should provide the country with 10 to 15 megawatts of energy.

VINLEC, SVG’s state-owned power company, prefers to fund and own the transition facilities for power plant, Gonsalves has said.

Parliament will on Tuesday continue debate on the Geothermal Resources Development Bill at which time Gonsalves will response to lawmakers’ concerns.

Gonsalves has presented electricity generated from geothermal energy as a potential “game changer”.

The main opposition New Democratic Party, of which Cummings is a member, seems to agree on the role that geothermal energy can plan in revolutionising the local energy sector.

However, Cummings, who is MP for West Kingstown, told Parliament last week that the project, as being undertaken by the government, is “a sinister plot to enrich people at the expense of the people of this country”.

The government says it will invest 25 per cent equity in the US$82 million project.

Cummings, who led the opposition’s response to the Bill, said that he attended one of the government-organised discussions on the project.

“I went to this consultant and the folks, I thought, were very straight. They said, look, we don’t have a panacea here you know. To quote them, they said, ‘At best, the project can expect a 25 per cent reduction in the cost of producing energy in St. Vincent and the Grenadines, according to 2014 fuel charges,” Cummings told Parliament on Tuesday.

Cummings noted that the role of Reykjavik Geothermal and Emera is only producing the energy.

“I am submitting by that proposed 25 per cent, if it is possible, that we could find ourselves spending millions of dollars, tens of millions of dollars and find electricity cost being at the same and even higher than it is now based on this proposal.”

He said the issue is not that   geothermal energy wouldn’t be produced cheaper than the other forms of electricity.

“That is not the issue. These people have to get their money first. That is the problem,” he said of the foreign investors in the project.

“That is apparently what this government has signed on to, to rob the people of this country of its resource and give it to outsiders who gambling and want big money returns on their money,” Cummings told Parliament.

“That is what this project is about. My goodness! Don’t we care about the people of this country? The resource is there for the benefits for all of the people of this land. Why are we going to pick out these people to bring money and get returns?”

He said that the power agreements that the government has signed with the investor are “secret documents” that the public doesn’t know about as yet.

“Those power agreements bind us to making sure that these people first put their hand and break the cookie and take the lion share; whatever crumbs left, we can spread it across the people of this country.

“An NDP administration will revisit this agreement day one. Because we have to look after the interest of the people of this country…” he told Parliament.

Cummings said the government wasted a lot of time that it could have used to finance a geothermal power plant using mostly grant funds for the exploratory phase, rather than borrowing, as is currently the case.

“I heard a new word come up this morning: it is no longer a game changer, it’s a ‘path changing’,” Cummings said, quoting Gonsalves.

“We’re changing the path from our development to the development of others. Path-changing. That is what it has come to,” the opposition lawmaker said.