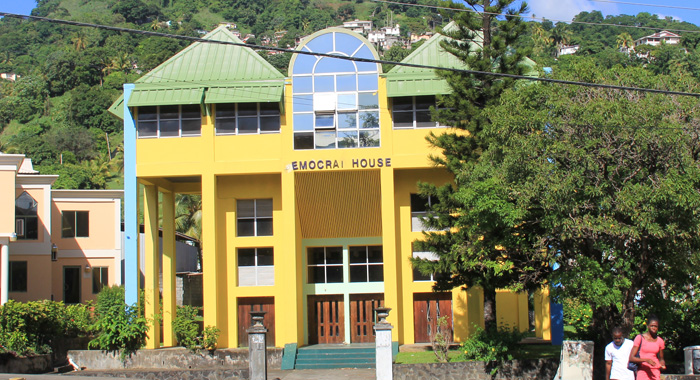 NDP general secretary Allan Cruickshank suggested on Friday that he and three other former MPs under the NDP each contributed more than EC$100,000 from their salaries over 17 years to help build the headquarters, which was constructed more than 20 years ago.

The other three MPs were NDP founder and former prime minister James Mitchell, Jerry Scott, and John Horne, who won their seats for the four times the NDP spent in office from 1984 to 2001.

The ULP’s questions came as the party announced that it has paid EC$1.2 million for “Labour House”, a building it had been renting for 10 years.

Francis said that Democrat House was built around the same time as the state-owned Financial Complex, adding that the same contractor built both buildings.

“Sometimes in life, it is always good to remember as a man thinketh so is he. And there are a lot of people who are of a particular thought process and certain dreams and they always think that everybody is like them,” Cruickshank said on his party’s radio programme.

He said there has always been a lot of jealousy surrounding the NDP’s headquarters.

He said the party brought the property after businessman and former NDP lawmaker Marcus De Freitas informed the party that it was for sale.

Cruickshank said that the NDP, which he said was “poor at the time”, grabbed the opportunity to own a headquarters.

“And the method used was salary deduction from us,” he said, adding that over the years MPs monthly contribution grew to almost EC$700 each.

“It was a contribution that was deducted at source; a Treasury deduction,” Cruickshank said, adding that he has salary slips to prove that deductions were made.

“But I think it was a well-known fact that all of us, our salaries paid — deductions were made, not only from minister, but from senators and from people who were responsible in term of some members of statutory bodies and so on,” Cruickshank said.

“You didn’t take your deduction and give it to any one man for him to bank it for you and so on that one or two persons became millionaires and you there suffering. It was deducted from your salary, you saw the deduction and you could have calculated it and know exactly what,” Cruickshank said.

He said the NDP also received contributions from other persons, including businesspeople and people who are sympathetic to the party.

Cruickshank said he didn’t want the issue to be a diversion.

“But when people make statements and you don’t challenge them you feel as if you as if well you are weak.

“This one will not go unnoticed. Whoever made the statement to try to insinuate that while we were building that headquarters the headquarters downtown was being built and they might have seen whatever, I don’t know. Just simply saying that will give the impression politically that something was siphoned off from there to there and so on.”

He described the development as a

“worthless, dirty kind of a diversion or attempt to give the impression that NDP ministers [did something wrong]”.

He further pointed out that it was said that while he was building his house around the same time that the New Grounds School was being built.

“I am still paying for it (house). You can check GECCU and see how much I am paying,” Cruickshank said.

He said the NDP has “no intention of covering up any worthlessness and trying to deceive anybody with any corrupt and dirty kind of behaviour.

“It is clear. The evidence is there. Anybody wants to do any research, you can check the Treasury Department computers and so on and you can follow the salaries and you can see where the deductions were made, contributing to the New Democratic Party and see how we paid for that building and all the other transactions,” Cruickshank said.

“It wasn’t constructed like the airport. Contractors were there when they were doing there, they were paid, I am confident of that, and up to today, the New Democratic Party owns that building and every cent was paid and we do not owe anyone for that building. So, don’t make any comparison to give anyone the impression that oh this was done at that time and that was build at that time…

“Truly, a building belongs to the New Democratic Party of St. Vincent and the Grenadines of which we are very proud. And those of you who are insinuating and going down that road, that worthless, dirty track and trying to give — that track is muddy, full of worthlessness — trying to give that impression. Take it and leave it and tell the people the truth. We will stand by the truth, we will live by the truth and we will die by the truth,” Cruickshank said.