Digicel call centre in SVG to open in October 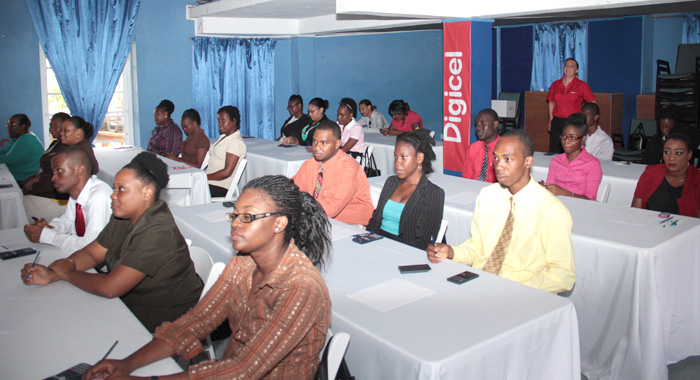 Job applicants prepare to take examinations for a chance to work at the Digicel call centre. (IWN Photo)

Telecommunications provider Digicel on Wednesday began administering written and oral test to the persons who have applied for employment at the call centre that the company will open in Kingstown on Oct. 1.

The 50-seat call centre is Digiciel’s first in St. Vincent and the Grenadines, and the company says it should greatly improve the quality of service being offered in the country.

The call centre will serve SVG by handling local and regional outbound and incoming calls.

A selection was made from a pool of 300 persons who were then screened via telephone.

In the two-day job fair that ended on Thursday, some 160 persons who responded to the company’s advertisements began testing for competence in working at a call centre.

“We have had a lot of applicants for this process and we want to make sure that you all have a fair opportunity,” Digicel country manager John Gidharry told the first batch of persons who wrote the exam.

“One of the things I’d like to lament to you today is each of you have the potential to become part of the Digicel family here in St. Vincent and the Grenadines and the region,” he said, noting that Digicel operates in 32 countries in South America, the Caribbean and the Pacific.

“And one of the things we pride ourselves, we do not limit your potential to St. Vincent,” Gidharry said. “So do not look at this process as just applying for today’s call centre, but with the view to moving on. We build leaders in the communities tat we operate in.”

He, however, noted that not all of the applicants will make it through the process.

Along with being tested, the applicants were introduced to the

“Digicel way” via corporate videos in which chairman Denis O’brien shared how Digicel came into being and his vision for the company. They also saw the huge community involvement of Digicel both in the Caribbean and Pacific and Digicel’s sponsorship of personalities like Usain Bolt, the fastest man in the world.

“This is a phenomenal opportunity for Digicel’s customers and the new employees,” Gidharry said in a statement on Thursday.

“We see the establishment of this entity not only as an extension of Digicel’s focus on enhanced customer service experience, and even more importantly, as a boost of local employment. This call centre demonstrates our continued commitment to the Vincentian community and our customers alike,” he said.

To offer support for the event, several persons with call centre experience were brought in to assist with the selection process and this was led by Kate Bell, head of Digicel Group H.R.

The team supporting the recruitment fair included Monifa Hayden, recruitment manager for Jamaica’s Call Centre who has experience in Mass Recruitment, Colletta McDonald, call centre manager from St Lucia and some of her team leaders as well as support from Antigua.