Kingstown facelift to be sped up after latest fire 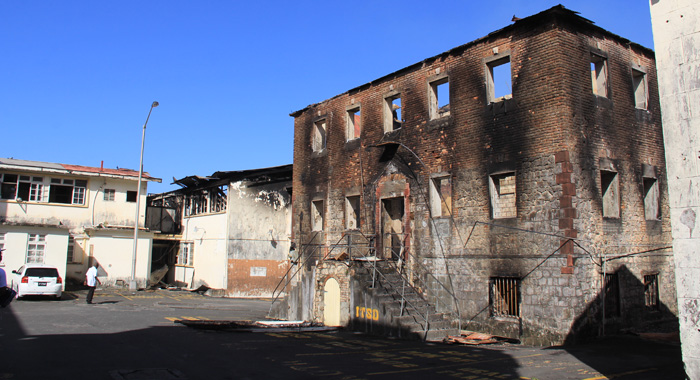 The government will demolish the buildings gutted by fire, including this brick building, left, from the nation’s colonial past. (IWN photo)

The fire that destroyed three unoccupied government building on Sunday will cause the government to accelerate its gentrification of that part of the city, Prime Minister Ralph Gonsalves has told Parliament.

The fire gutted the former Treasury, Electoral Office, and Ministry of National Mobilisation buildings on Egmont and Halifax Streets.

Gonsalves told lawmakers that the Ministry of National Mobilisation was relocated because the building was severely infested with termites.

“The wooden floors and windows and doors also are seriously infected. The building also had some security issues — a number of break-ins and enterings.”

“The bridge connecting the old National Mobilisation building and the old Treasury, it’s damaged and may pose some threats to be pedestrians and vehicles utilising access road.

“The old Printery Building is also termite infested and may also pose other risks, fire hazards being one,” he said.

“And the buildings which have been impacted by the fire are now at greater risk for social misuse — people going inside of them.

“And activities will be fostered there, as happens at the old BAICO site where the police and other security personnel have had to go repeatedly to chase people away. So it is recommended by the Chief Engineer that the old Treasury Building, the National Mobilisation and old Electoral Office and the government printery be demolished,” Gonsalves said.

The old printery, which was not damaged by the fire, currently houses a mas tent.

The Ministry of Works is preparing conceptual architectural designs for the development of the block, which includes the BAICO construction site, Gonsalves said.

“Redevelopment of this site provides opportunities for the reduction in rental space required for several government ministries and departments, provision of additional space for parking and provision of an alternative route out of Kingstown,” he said.

Gonsalves, who is also Minister of Finance, said that the Budget last year, there is a project in the capital estimates for that area and precisely the buildings destroyed by fire.

Up to the time of the fire, the Ministry of Works was given the mandate to prepare architectural drawings for that whole area, he said.

“Clearly, there now needs to be expedition in that. And I just want to speak towards the various components of this project for which there is an allocation of seven million dollars inside of the Estimates, among other things, for the purchase, acquisition of the BAICO property and the commencement of construction of two buildings.

“Clearly, those plans have to be revised as a result of the fire, but basically to keep in sync with what was the developmental plan for this area,” he said.

Gonsalves said that as a result of the fire, there will be a “prior phase one”, which is going to be the demolition of the structures.

This includes stockpiling of elements of the National Mobilisation building for reuse, he said.

The building dates back to pre-Independence and Gonsalves said it contains a lot of old bricks. He told lawmakers it would be good if when the building is demolished that great care be taken to have the old brick to reuse in the architectural design and also the construction.

“It is unfortunate that the structure doesn’t admit to keeping the existing frame as happened in other buildings in the city, but we can save the bricks, for instance for those purposes,” he said.

Demolition of the buildings is expected to cost EC$1.175 million

Phase two involves the reconstruction of the three-storey building “on the footprints of” the Treasury building to accommodate the Treasury on the ground floor, Audit Department on the first floor, and Social Welfare on the top floor.

“This building will accommodate as best as possible the various architectural features of the existing building while creating a modern, green building,” Gonsalves said.

“I should say, Mr. Speaker, there is a proposal by an entity out of Trinidad. They wanted to build at that spot a boutique hotel in the urban area, but it seems as though we will have to proceed in doing this rather than give in to the request for that boutique hotel.”

Phase three involves the acquisition and construction of the British American Insurance Co. building in accordance with the original approved designs.

“This building is proposed to house the Ministry of Education and other offices, including, hopefully, some space provided for the Inland Revenue,” Gonsalves said, adding, “I know the Honourable Attorney General is fighting for space there. We are hoping that phase two and three can be moving simultaneously.”

Phase four considers an area for a car park near the old Government Printery and National Mobilisation buildings but that is not finalised.

Gonsalves said the estimates contained EC$33 million for the redevelopment of the area, but this figure will have to be reviewed in light of the fire.