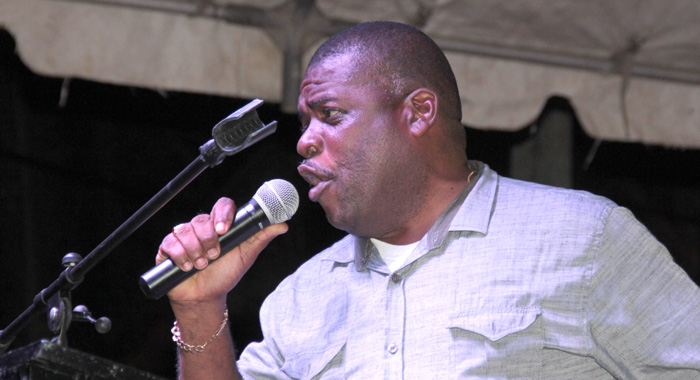 The ruling Unity Labour Party says that it will paint Chateaubelair red on Sunday (today) as it hosts a rally in the North Leeward town.

But MP for the constituency, Roland Patel Matthews of the main opposition New Democratic Party (NDP), said in North Windward Saturday night that the ULP has long achieved that goal.

“… by their bad policies, they have painted North Leeward red already because everything in this country, including North Leeward, is in the red,” Matthews said at an NDP rally in Langley Park.

He said he wants the ULP to bring a large crowd to North Leeward.

“You know why? So that when they pass Coulls Hill they must encounter the death trap that the Unity Labour Party has left for Coulls Hill,” Matthews said.

He was speaking about a section of the Leeward Highway where four persons have died in two incidents since 2013 when vehicles went over broken retaining walls and down a cliff.

Three members of a Spring Village family died in June when a car went over the embankment.

“You could imagine since 2013 a piece of back wall break away and up to today four persons have lost their lives and this wicked government has not done anything to that?” Matthews said.

“All that is there is a white mark to show where the last vehicle went over, and this government talking about they love poor people.

“Well, the last three people who went over there, the colour of their blood is red. So indeed they have painted the country red and North Leeward, foremost in all of the constituencies, they have painted it red,” he said.

“Brothers and sisters, this is serious time. You have to make the change because if you don’t crappo smoke we pipe,” Matthews said.

The NDP is trying to thwart the ULP’s attempt to secure a fourth consecutive term in office.

General elections are due in March 2016, but Prime Minister Ralph Gonsalves has said that he will call the elections before the end of 2015.

“This is our time now. This is the time for the New Democratic Party to take the reigns of government,” Matthews said of the party that was voted out of office in 2001, after 17 years.

He told the gathering to encourage their friends to vote for the NDP and urged them to ensure that they register to vote.

Matthews expressed confidence that North Windward — where Montgomery Daniel is seeking a fourth consecutive term as MP — will abandon the ULP and elect the NDP.

He noted that Baptiste’s YEP is especially for the young people, adding, “And as we in the NDP like to say, we have the youth at heart.”

Matthews said that the nation must rid itself of the ULP administration.

He said the ULP cannot brag and say they are going to continue the progress.

“They can’t say that because they have done absolutely nothing to advance the young people of St. Vincent and the Grenadines. I am saying to you tonight, never in our history unemployment had been so high among young people — because of the false and fake promises of the Unity Labour Party,” Matthews said.