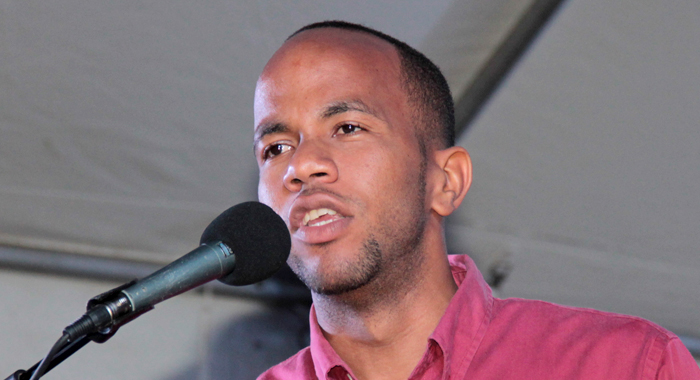 Browne based his accusation on a development earlier this month, which saw Leacock admitting to I-Witness News that he was wrong about the boundaries between his Central Kingstown constituency and East Kingstown, which Eustace represents.

“At the end of the day, we have a man in Leacock, he moving up and down the place as if he is some strong man in Central Kingstown. And all it take (sic) was one shot from a young man in East Kingstown to cut him down to size,” Browne said at the ULP rally in Redemption Sharpes.

He was speaking about East Kingstown resident Shavis Trimmingham, who has accused Leacock of exploiting his ignorance of the constituency boundaries and causing him to register erroneously in Central Kingstown.

“Imagine they have the heart to go on radio and to accuse people of registering in East Kingstown when they are the ones who ain’t above board with that matter,” Browne said of the opposition.

The NDP has threatened to sue persons who register or transfer their voter registration to constituencies in which they do not live.

Browne, who will make a second attempt to unseat Eustace in general elections later this year, said that in the 2010 polls the NDP tied him up in court with illegal voter registration lawsuits, and took up precious time from his campaign.

“And they come to try that trick again in this election … That is why we are not going to fall for their tricks with respect to registration and we not going to fall with any other dirty tricks that they could come with now to throw smoke in your eyes and to distract you from the outstanding record of this Unity Labour Party administration,” Browne said.

He said Trimmingham corrected his voter registration and now the NDP seems to have a problem with persons transferring and registering in their correct constituency.

Browne further said that Leacock told I-Witness News that he knows the boundaries and accused the young man of being ignorance.

But later, the Central Kingstown MP went back to I-Witness News to say he was wrong, Browne pointed out.

“A man like that should resign and vacate his seat in Parliament. You could be so wrong and strong about an issue, you could accuse people of ignorance and when you hear the truth of the matter you are the one who is ignorant about what is going on?” Browne said.

“He [is] deliberately trying to undermine his very own leader. Well, I have to tell him (Leacock) he don’t have to worry about undermining him, because we go deal with him (Eustace),” Browne said.

“So if Leacock wah fight up to be leader of the NDP, he ain’t go ha’ Arnhim Eustace to worry about, but he still can’t get past Beresford Phillips. So he needs to look for a different profession.”

Phillips is the ULP’s candidate for Central Kingstown.

Browne said the young people will not be intimidated by what he said the NDP was trying to do.