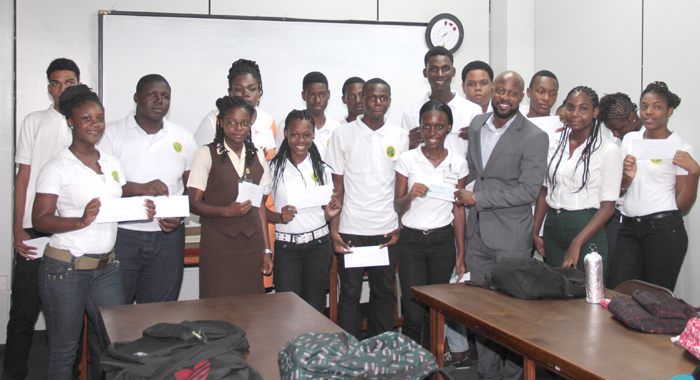 Carlos James, the Unity Labour Party (ULP) candidate for North Leeward, has presented a cheque for EC$10,000 to Community College students in North Leeward under his Access to College Education Programme (ACEP), which is into its second year.

The monies will be administered by Generation Next Inc., a non-profit organisation based in the North Leeward town of Chateaubelair.

Cayama Edwards, a director of Generation Next, received the cheque during a press conference in Kingstown last week.

At the event, acceptance letters were also presented to the students who will benefit from the programme.

Generation Next will disburse the monies to some 20 students over the next two academic years, through to the 2016-2017 school year.

James, a lawyer, said that the ACEP was not connected to his candidacy in the upcoming general elections, which are expected by year-end.

“I want you to understand that it is a continuation of the work I started in 2014 and I am putting in place the resources here for this programme to continue into 2016.”

He said that the programme was being formalised this year and encouraged the business community and citizens who are inclined to assist to contact Generation Next.

Last year, when the programme was launched, James said in a press release that students had their tuition covered from as much as 50 to 100 per cent in some cases, while some students benefitted from a travel bursary through the Office of the Prime Minister.

He told reporters that this year, the programme did not receive any assistance from the government.

“I know that there are critics who would say, Mr James is being helped by the government, that is why he is doing so well with young people and putting on these programmes in North Leeward. Every single cent you see here are hard-working dollars that came from my pocket and the assistance of who believe in me and believe in the work I am doing in North Leeward. I want to make that clear,” James said.

Asked later how much of the EC$10,000 he contributed, James told reporters most of it but declined giving a figure.

However, a well-placed source has told I-Witness News that a state-owned company donated the bulk of the funds.

James strongly denied this when asked by I-Witness News on Monday.

At the press conference, he encouraged the students to stay focused and remain in school.

James said that students from North Leeward are coming from vulnerable communities, adding that he hopes they will be able to receive assistance when attending the Community College.