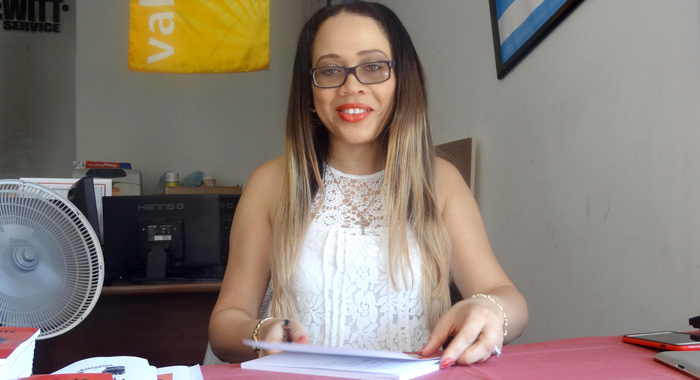 A Vincentian residing in the United States has written a book to share her experience of how open-heart surgery to repair her mitral valve changed her life.

Sherryann Frederick launched the book, “A Heartfelt Moment”, last weekend in Brooklyn at a book signing, where the attendees included Selmon Walters, consul general of St. Vincent in New York, who delivered a powerful speech while encouraging the audience to always strive for excellence and to give back to their community.

A Heartfelt Moment is described as “a reason to be strong and to trust in God”.

The idea of A Heartfelt Moment emerged while Frederick was undergoing open-heart surgery in Barbados in 1998.

Frederick said she felt the need to share the story of her ordeal with the world.

A Heartfelt Moment is described as an open book on her journey with a heart disease; her inspirations, motivations, her faith, and how she conquered what seemed impossible.

Frederick also wrote the book in an effort to raise awareness of heart disease.

It attempts to inspire the reader through the author’s testimony of faith and belief in God.

Frederick, a mother of two, holds a Bachelor of Science degree in criminal justice from John Jay College of Criminal Justice, New York.

She is a graduate of the St. Vincent Technical College and Girls High School and is a former president of Shining Stars Youth Club in Lowmans Windward and a former member of Leo Club of St. Vincent and the Grenadines.

In 2013, she established the Bethel Frederick Community Charitable Foundation (BFCCF), in recognition of her mother Bethel Frederick, a former librarian who provided over 35 years of service at the Lowmans Windward Public library.

The BFCCF is collecting books for the Lowmans Windward Public Library.

In 2014, the foundation awarded two scholarships to the top male and female student, in the 2014 CPEA examinations, from the Lowmans Windward Anglican School, and also distributed backpacks filled with supplies to the nine other successful students.

In 2015, Sherryann was nominated as the treasurer the non-profit organisation named, Progressive Friends of SVG, aimed at assisting patients at the Mental Health Centre and the Lewis Punnett Home.