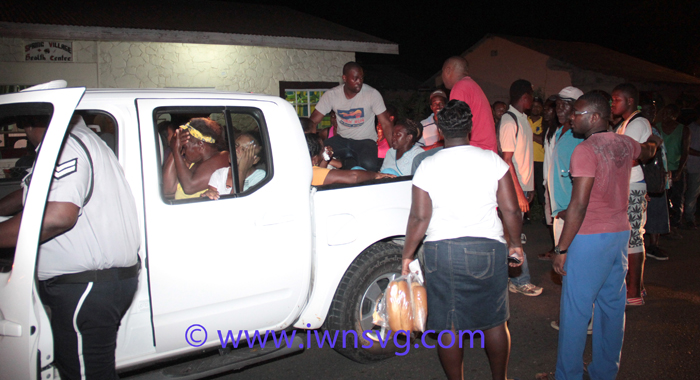 Some 12 persons have been taken to hospital in Kingstown after a truck, TQ406, overturned while on the way to an election campaign event in North Leeward Saturday evening.

The occupants of the vehicle, supporters of the main opposition New Democratic Party (NDP) from North Windward, were on their way to the party’s campaign rally in Chateaubelair.

The accident occurred between Gordon Yard and Spring village.

NDP candidate for North Windward, Lauron “Sharer” Baptiste, told I-Witness News in Chateaubelair that the driver of the truck was too distraught to explain what happened.

“All he is doing is crying,” said Baptiste, who transported NDP supporters in a minivan from North Windward.

NDP president and Leader of the Opposition, Arnhim Eustace, remained with the injured at Spring Village health centre, where they were seen by district medical officer, physician Francis Murray before being transported to Kingstown.

“I would say there are 12 or 13 persons who are injured, but one lady in particular her ankle and so on seems to be badly smashed and she went to the hospital well ahead of the other people,” Eustace told I-Witness News in Chateaubelair.

“Just before I left there, eight or nine people went to the hospital mainly for observation, and there are a number who the doctors are concerned about because they have some chest pains,” he said.

“So you really wouldn’t get a full picture before later on,” the NDP president said.

Eustace praised the skill of the driver.

“I have to credit the driver because where I saw the skid marks, he could have gone over the other side and many people could have died.”

Reports are that as the driver began to lose control of the vehicle, he crashed it into the bank at the left of the left, avoiding the cliff to the right.

“He managed to back the truck on the other side of the corner, which I think really was a masterful thing. He save a lot of people,” Eustace said.

I-Witness News contributor E. Glenford Prescott, reporting from Kingstown, said that the injured person were being taken were x-ray around 8 p.m.

Saturday’s accident was the second vehicular incident to affect the NDP this campaign season.

In December 2014, Edgar Cruickshank, a former council member of the ruling Unity Labour Party, died when a car crashed into an NDP meeting in Clare Valley.