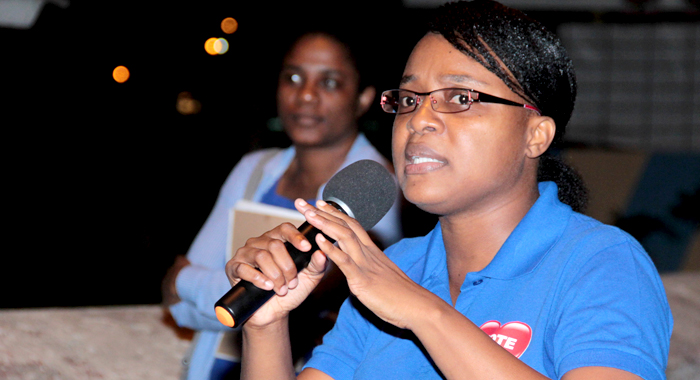 Head of the Democratic Republic Party (DRP), Anesia Baptiste, wants the age from which females can consent to sex to be increased from 15 to 18 and says her party will do so if elected to office.

Speaking to a small audience at a public meeting in Arnos Vale on Thursday, Baptiste, a former senator for the main Opposition New Democratic Party (NDP), said she was shocked recently when she learnt of the level of gender-based violence against young women in St. Vincent and the Grenadines (SVG).

She noted that Vincentians are considered adults when they reach 18, but added statistic from police shows that between June 2012 and June 2014, SVG had a large percentage of women who were victims of gender-based violence, about half of them younger than 15.

She noted that the Marriage Act says that a female can marry at 15, with the permission of her parents.

“It means that she could have sex, legally. At 15!” Baptiste said, adding that the Criminal Code also says an individual is guilty of an offence only if they have sex with a girl under the age of 15.

Baptiste said that if a girl can have sex at 15, she can have sex with whomever and a man can say she is of age and the girl can rebel against her parents.

“So the values in the minds of the individuals, both the young girl and the older man, are so affected and they get involved in relationship and if she is having sex legally with the man and she do something he don’t like, he might feel he could hit her and she becomes a statistic of gender-based violence at 15.

She said that notwithstanding the statistics, the Unity Labour Party government, which came to office in March 2001, has not done anything about it.

“You have a Minister of Education [Girlyn Miguel], a woman like myself, she never thought to say, ‘Prime Minister, we have to change the age of consent.’ You have an opposition, I never heard them advocate until recently, somebody told me Mr. [Arnhim] Eustace was on the radio talking about it,” Baptiste said.

She said the NDP did not mention the age of consent in their “Conversation with Women” town hall meeting in Kingstown earlier this year.

Baptiste pointed out that Nailah John, head of the non-governmental organisation Leave Out Violence In S.V.G, asked Eustace at his town hall meeting in New York earlier this year about changing the age of consent and he said he will look into it and research.

“If you really had the interest of young girls at heart, if you had nothing to feel compromised about, you would certainly say affirmatively, ‘Yes, ‘Miss John, we are going to raise the age of consent to sex from 15 to 18,’” Baptiste said.

She noted that Trinidad and Tobago recently raised the age of consent to 18, adding that she has been talking about the issue, and called for it in March at a multi-stakeholder workshop in SVG.