Anesia takes credit for NDP resurgence; asks why must she wait to govern 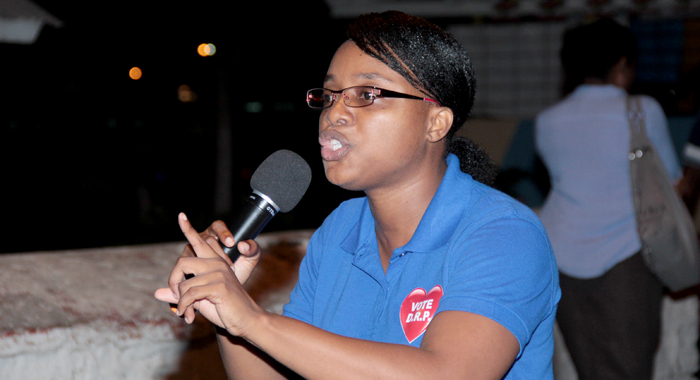 Former senator for the main opposition New Democratic Party (NDP), founder and leader of the Democratic Republican Party (DRP), Anesia Baptiste, is crediting herself for the NDP’s return to prominence.

The NDP was voted out of office in 2001 after 17 years and lost the 2005 and 2010 general elections, though it increased by four the number of seats it held in Parliament, coming one seat shy of forming government.

Baptiste was appointed as an NDP senator after the 2010 general elections but Opposition Leader Arnhim Eustace fired her about 15 months later, after she wrote what many considered a disrespectful and strongly worded letter to him about the NDP’s policy on religion.

Speaking at a DRP meeting in Arnos Vale on Thursday, Baptiste said that some people have said that she must wait her turn to access the reins of power.

“People are not foolish.

“Wait our turn when we have a government continually neglecting us, continually infringing on our rights and freedoms and a lazy opposition that has kept it there for 15 years? Wait my turn?” Baptiste said.

She said that the NDP has said that, over the years, it has been gaining momentum and votes.

But Baptiste noted that St. Vincent and the Grenadines uses the first-past-the-post system.

The NDP has, however, gained an increasing number of popular votes in each election since 2001 even as the ULP has seen its support decrease at each outing.

Just 2,188 votes separated the parties in the 2010 general elections.

But Baptiste said that the NDP began to show prominence when she came on the scene.

“You know when they started to show some prominence? When in 2009, this young woman came on the scene and basically helped them win the referendum election,” she said.

The NDP-headed “Vote No” camp convinced Vincentians to reject proposed changes to the nation’s Constitution.

Baptiste noted that if the referendum were an election, the ULP would have won just two of the 15 parliamentary seats.

“So the only time that the NDP opposition started to show something about themselves is after the impact of Anesia Baptiste in 2009. Because if that was a general election, Ralph been gone clear: 13-2.”

Baptiste noted that she was on the campaign trail in the 2010 elections as well.

“And coming off the strength of the referendum performance, they took four seats from the ULP. But don’t fool yourself. That wasn’t the help of NDP leadership by itself. They had the help of Anesia Baptiste.

“So when they want to boast that they have been gaining influence over the time, they’re ungrateful and fail to realise that the very people that help them to vote the influence is who they kicked out the backdoor because she stood up to them and told them where they were wrong, even though when I stood up to Ralph and told him where he was wrong in the referendum they were glad. Hypocrites. That kind of hypocrisy cannot help this country.  It cannot help this country,” Baptiste said.

Political observers have expressed doubt that Baptiste and her DRP or Ivan O’Neal’s SVG Green Party are likely to have any impact on the outcome of the poll, which they say will be a straight fight between the NDP and the ULP.

4 replies on “Anesia takes credit for NDP resurgence; asks why must she wait to govern”