SVG accepts US apology for arrest of UN Ambassador 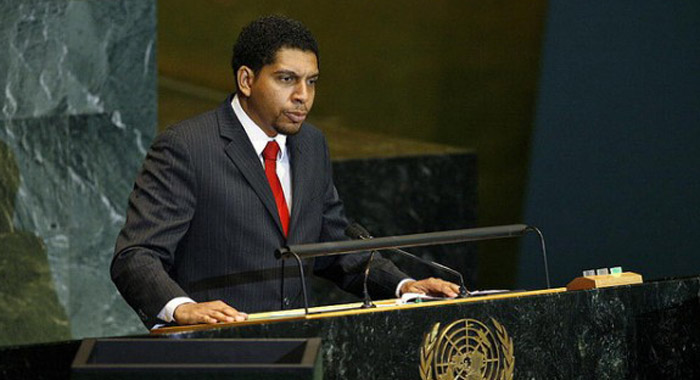 Former SVG Ambassador to the UN Camillo Gonsalves was arrested outside his office building in 2012. (Internet photo)

Minister of Foreign Affairs, Sen. Camillo Gonsalves, has accepted the apology of the United States government over his March 28, 2012 arrest in New York when he was St. Vincent and the Grenadines’ ambassador to the United Nations.

“… the UN representative for the United States at the time, who is now also a member of the cabinet of Barack Obama, … she went to his office and she made an apology to Camillo on behalf of the government and he has accepted that and moved on,” Prime Minister Ralph Gonsalves, Sen. Gonsalves’ father, said in response to a question at his annual town hall meeting in New York on Saturday.

After the incident in 2012, the younger Gonsalves was treated at a hospital in New York for injuries that he sustained when he was arrested by a New York police officer outside of his office building in New York.

He told I-Witness News then that while he did not sustain any broken bones, there was some nerve damage to his left wrist and thumb.

In March 2012, U.S. ambassador to the United Nations, Susan Rice, met Sen. Gonsalves and expressed regret for the incident on behalf of herself and the U.S. government.

Kingstown had said that it would explore the possibility of bringing a legal challenge against the NYPD over the incident.

Sen. Gonsalves told a town hall meeting in New York in April 2012 that he was not “particularly optimistic” about the outcome of what was then an expected NYPD internal review of the arrest.

His doubts existed even after Rice informed him that she had persuaded the law enforcement agency to conduct a thorough internal review of the incident.