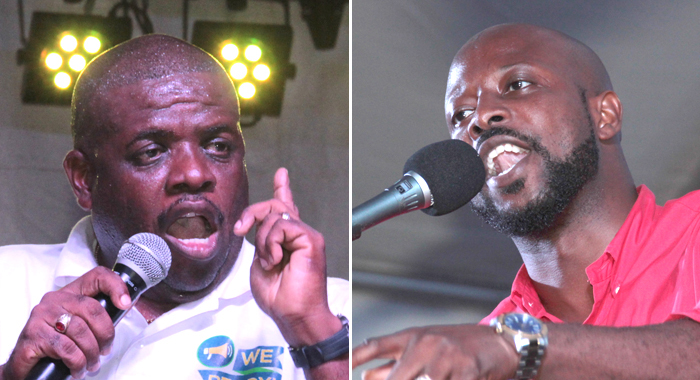 MP for North Leeward Roland “Patel” Matthews has portrayed his contender, Carlos James of the ruling Unity Labour Party (ULP) as a “wannabe, cry-baby” who failed to stand with constituents as they sought justice for a woman who died after falling ill during a police raid of her home.

Speaking at a rally of his New Democratic Party (NDP) in Chateaubelair on Saturday, Matthews said all hell broke lose in the North Leeward town after he was elected in 2010, “much to the disappointment of a few”.

He said there were days when 14 persons were searched and harassed during the pre-dawn hours because they supported him during the election.

Matthews said that the harassment and search of innocent people continued until his schoolmate, friend, and strong NDP supporter, Sylma “Codo” Thomas, fell ill during a police raid of her house on March 27, 2014 and died one day later.

Neighbours and relatives of the 49-year-old woman told I-Witness News then that police did not act promptly to provide her with medical attention when she suffered what later was diagnosed as a stroke after the raid began sometime around 2:45 p.m.

Matthews said that after Thomas died in mysterious circumstance, he wrote Commissioners of Police, Michael Charles, to ask for an independent inquiry.

Sergeant Luke James of the US Army, a classmate of Thomas, also did an online petition asking for an inquiry, Matthews said.

He said persons on the ground walked around with petition asking for an independent inquiry.

“I was on Super Dan step when the wannabe crybaby was asked to sign the petition. He refused and say he don’t want to mix up in them kinda thing they,” Matthews said of James.

“Now he ha’ the heart, he boldface with he outta place and pompous self and want to ask you for your vote and he ‘fraid to represent you.

“Chateaubelair people, you in particular, you must not allow anyone who is filled with false pretence, anyone who is a show-off, want to come into North Leeward and believe they run thing, walking ’round with their pants dropping down and yo’ seeing their boxer shorts; we want better than that,” Matthews told party supporters.

Retired head of the Criminal Investigations Department, Willisford Caesar, was appointed to head an investigation into the case and has presented his findings to the police.

However, the report has not been made available to Thomas’ family or the public.

Commenting on the development in March 2014, James accused Matthews of politicising Thomas’ death.

James told I-Witness News then that   he was invited to speak at a cultural event in Chateaubelair on March 22, 2014 to celebrate National Heroes and Heritage Month.

He said that at the end of the programme he was approached by a young lady who was “seated next to Patel Matthews, in the presence of Patel Matthews.

“She approached me asking whether or not I had signed a petition calling for an inquiry into the death of Miss Thomas. I asked the young lady whether she was aware that there was a commission set up to investigate the matter. She said ‘no.’ I further asked the young lady if she was aware (that) the person heading the inquiry was independent of the Police Force. She said, ‘No.’ I then asked the young lady if the purpose of the petition is to call for an inquiry and if there has already been a Commission set up … to investigate the matter then if there is the necessary need for the petition. She rightfully agreed with me and said she was unaware of a commission (having) been … established,” James told I-Witness News then.