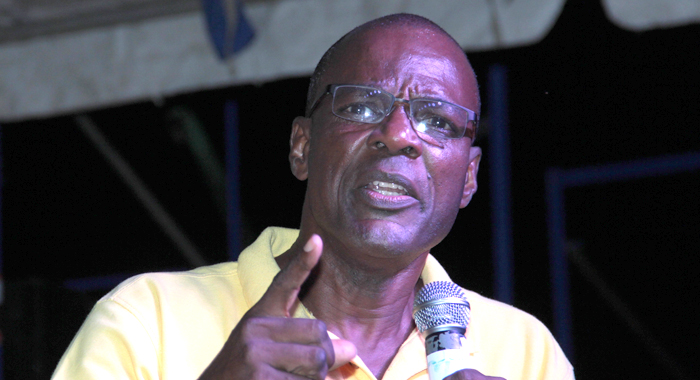 An opposition MP says when re-surfacing of the South Leeward Highway begins, residents of western St. Vincent and the government will fully appreciate the need for an alternative road to the leeward side of the country.

The MP, Daniel Cummings, the opposition New Democratic Party’s (NDP) spokesperson for infrastructure and health, told a campaign rally in Rose Place Wednesday night that he has been urging the government for years to look at the issue of transportation on the leeward side of St. Vincent.

There are many options for residents of the Windward side of St. Vincent to get into Kingstown, the nation’s capital, Cummings said.

“On the Leeward side, it is one road only. Should something happen, a trailer breaks down, an emergency situation, something happen down the leeward side and you have a part of the road [blocked], everybody beyond that point is stuck.

“The Chateaubelair wharf is not working so you can’t even use a boat to take people out from North Leeward,” the West Kingstown representative said.

He said he has spoken about the traffic situation between Kingstown and Campden Park.

“You have not seen the nightmares that are going to come when they start resurfacing that South Leeward Highway. It’s going to be a major catastrophe. It is going to be a major disruption of your lives. And we warned these jokers that the way to go about that project is to build the alternative route from Campden Park, through Lowmans, Buddy Gutter, into Ottley Hall and straight to Kingstown.

“We warned them. We told them to include that as part of the project and do that first so you have an alternative route that will allow you to close the road for a portion of time and fix it properly.”

He accused the Unity Labour Party government of not listening because it doesn’t care.

“They don’t care about the utility of the project,” he said.

Since in the days when Ottley Hall Marina was designed there was a road going around Ottley Hall into Lowmans Bay and then onto Campden Park, Cummings said.

“It is still there to be done. That road is going to make a major difference,” he told party supporters, adding that an NDP administration will build the road.

He told the gathering that in North Leeward, MP for that constituency,  Roland “Patel” Matthews, an NDP member has identified an area where a road can be built from Walliabou to Cumberland without having to pass through Belle Isle.

“That is a road that an NDP government is going to bring into being,” Cummings said.

The MP said there are many things to be done to improve the lives of residents of West Kingstown.

He said that for years, residents have been asking the government “to do something for what passes for road in Buddy Gutter.”

A few years ago he asked then Minister of Works, Sen. Julian Francis, to go with him on a Sunday to sit down with the people of Buddy Gutter, who were willing to put in the labour and even bring in heavy equipment to fix the road, Cummings said.

That was a September and Francis said he would get his cousin to do the road before the year ended.

“Many years and moons have passed, the road broke away by the power plant, they took forever to fix a piece and they fixed only up to the power plant and they did nothing for the road that people live [along].

“That’s a government that cares. But now, at the 99th hour, I say hallelujah they started to do some work in Buddy Gutter. Ah feel so good. Ah say to the people, thank God, never mind they ain’t even doing it properly. At least the people are getting something like a road in Buddy Gutter just before they go to the polls and vote the vagabonds out. Out! Because they know that an NDP government is going to upgrade that road, that the link road from Kingstown to Edinboro, to Ottley Hall into Buddy Cutter and Campden Park will be built. I ain’t asking you. I [am] telling you that will be done because I understand the importance of this kind of infrastructure.”

Cummings also said that the two rivers flowing through Kingstown should be lined with concrete to help to prevent blockages.

He said North River was undermining the Catholic School because the river continued to undermine its banks.

“We are going to get those rivers lined.  What we mean? We will do the proper design, the proper gradient, the proper size and the proper slope and we will concrete them. And, in areas, we will be able to slab the river.”

He said that the area of the river in Stoney Ground, for example, when covered could be used to effect facilities for arts and craft and small business or even a pan yard.

“You can add to aesthetics of the city,” he said, adding that the same thing can be done at South River Road.

“It is a disgrace to think that in this modern age we still have rivers flowing through the city that are unlined. Those are basic projects that any government that has any decency would treat as priority. Those will be done,” Cummings said.