Elections ‘not about sex and dutty commess’ — Gonsalves 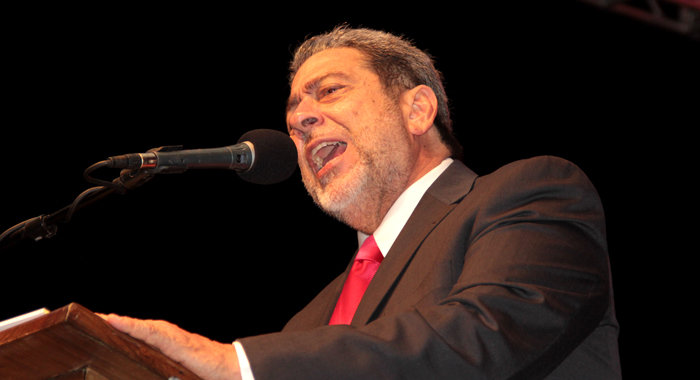 The ruling Unity Labour Party (ULP) will not engage in gutter politics in its bid for a fourth consecutive term, Prime Minister Ralph Gonsalves said Saturday as he announced the Dec. 9 general election date.

Gonsalves outlined the areas that the ULP will focus on if it is re-elected, telling party supporters that the elections are not about “lies, nor innuendoes, or scurrility or empty slogan-bearing posing as policy.”

“Lies, innuendoes, or scurrilities, empty slogan-bearing posing as policies, that’s the NDP way,” he told party supporters, adding, “We have none of that.

“We in the ULP we are not going down that road. You will not hear any of us pulling down anyone on the NDP slate or its platform,” said Gonsalves.

“We are not going to do that. We will not give you any commess (gossip) about anybody in the NDP,” Gonsalves said, adding that the elections are  “serious business now for serious people.

“We will not make any personal attacks from our platform: who is sleeping with whom or who is after this man or woman, or who beg who for sex.

“We are not going to get into anything personal or private business like that; none of that,” the 69-year-old leader said.

“We have too many positive things to speak about our party’s record and performance, our candidate and leadership and our policies and plans for the future to go into the gutters. We will not go into the gutters with the New Democratic Party.”

In the past, Gonsalves has publicly referred to citizens as “wutliss dutty dawg” (worthless dirty dog) and other derogatory names during election campaigns. He said, however, that the coming elections “are about making our people’s lives better, not about taking us into the gutter.”

Gonsalves said that his party will not get involved in any of those things.

Notwithstanding Gonsalves’ comments, his party on Monday broadcast a television advertisement that included a video clip of NDP candidate for Central Leeward, Ben Exeter, jumping on the back of Lauron “Sharer” Baptiste, the NDP candidate for North Windward, in celebration after a dance-off between them.

It is believed in some circles that the advertisement is an attempt by the ULP to call into question the sexuality of the two first-time NDP candidates.

In his address Saturday, Gonsalves said focusing on gossip is not going to help improve people’s lives.

“This election is about education and health; not about character assassination by stealth. These elections are about housing and lands; not about Elson, Douggie, Bing or Hans.

Political observers say the elections are too close to call and that the ULP will face a strong challenge by the Arnhim Eustace-led main opposition New Democratic Party (NDP).

“And I tell you too, these elections are about the person called Arnhim Eustace and how he has been leading. This is not about making out Arnhim to be an ignoramus or moron, and I don’t want to hear you all say that about him,” Gonsalves said.

Gonsalves said the elections are to select the candidates and party to govern St. Vincent and the Grenadines for the next five years.

Gonsalves said the poll is about which party can do better to lift up the nation.

“Let us, therefore, keep everything in focus, in balance and with good sense, good taste and judgement, and, above all, let us not try to win these elections by all costs.

10 replies on “Elections ‘not about sex and dutty commess’ — Gonsalves ”