Gonsalves says ‘sex tapes’ are not an election issue 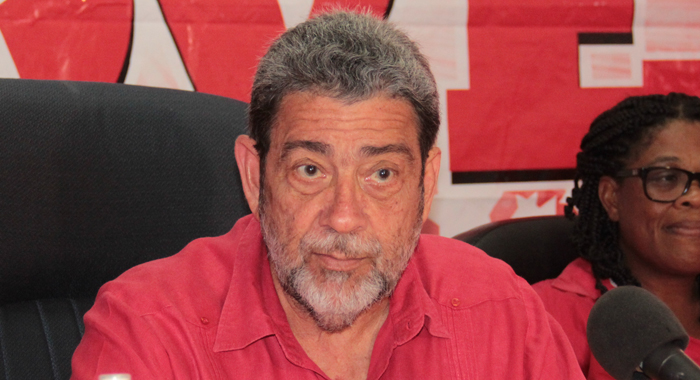 Prime Minister Ralph says that a “sex tape” featuring a woman and a man whose voice is strikingly similar to a prominent member of his Unity Labour Party (ULP), will not influence how the electorate votes in the Dec. 9 general elections.

At least four audio recordings have appeared online since Nov. 7 — when Gonsalves announced the election in which the ULP will seek an unprecedented fourth term of office for a Labour government in St. Vincent and the Grenadines.

A journalist at ULP press conference on Monday told Gonsalves that the general consensus is that the male voice is strikingly similar to that of a prominent member of the ULP.

The journalist asked the politician if he thinks the recording would have an impact on the ULP in the elections.

“I’m not dealing with them. I know the voters of St. Vincent and the Grenadines and I have heard what is of concern and interest to them and that is what I am focusing on,” Gonsalves said.

The leadership of the NDP has remained silent on the sex tape amidst accusation by ULP supporters that NDP operatives were involved in the production and release of the recordings.

The ULP went into damage control mode shortly after the release of the first tape, with trade unionist Joseph Burns Bonadie, announcing on a radio programme supportive of the party, what he said was the name of the woman in the tape as well as a flight — including her seat number — she allegedly took out of St. Vincent ahead of the release of the tapes.

Gonsalves said that the issues he identified from the beginning of the campaign are going to deliver the ULP “a resounding victory”.

“And when these elections are over, I’m absolutely sure that you will come to me and say, ‘Ralph, what you answered that day is absolutely correct,” Gonsalves said in further response to the reporter’s question.

Maia Eustace, daughter of Opposition Leader Arnhim Eustace, has said that the sex tapes are not part of the NDP’s campaign. She said the NDP’s campaign is about four core issue: corruption, crime, the treatment of women in SVG, and joblessness.

Speaking in the press conference on Monday, Gonsalves expressed confidence that the ULP will be returned to office.

‘And I can tell you in the critical seats, within a margin or 15 or 20 votes how many votes we are going to get and what they are going to get,” Gonsalves said, but declined to reveal the figures when asked.

He said he could make such a statement because he insists on a scientific coding.

“I am telling you that the way we are running our campaign, … I can tell you in North Windward the boxes where we are going to increase and roughly by how many,” he said.

Gonsalves prefaced that statement by saying that when he talks like that people say he is rigging the elections.

“I can’t rig no election. Is nonsense when people talk about that,” Gonsalves said.

He, however, declined to reveal the margin by which he said the ULP would win.

“I am just telling you I am a scientific person and all the tools of the science, I use. And I count,” Gonsalves said.

He said that in North Central Windward, for which he is incumbent MP, his arrangements are such that most of his supporters vote by 1 p.m.

“I’m not giving them (the opposition) any education as to what to do or not to do. But the Unity Labour Party is an organised party for several purposes and one of them is to win election.”

He said that some people say he is doing certain things because he wants to win elections.

“What’s the business of a political party? The business of a political party is to aggregate a number of competing interests and pull them together and have a consensus over those interests and to set about and put the machinery in place to win the elections within the law; nothing outside of the framework of the law,” Gonsalves told the media briefing.

“The point is this: there are a number of people who have an NGO mentality. Well, that’s why you are in an NGO and I’m heading a political party. I say all power to you for heading the NGO. I respect you and I love you for it. I give you lots of Labour love. But I know what it takes to win.”

The ULP is seeking a fourth consecutive term amidst a declining number of popular votes in each election since coming to office in 2001.

In 2010, it held on to power by a single seat majority, taking eight of the 15 seats, while the remainder went to the NDP, which captured four seats from the ULP to take their tally to seven.

Information reaching I-Witness News suggests that Wickham, who conducts surveys on behalf of the ULP, might have done another poll since then.

Asked if this was the case, Gonsalves said:

“If I did one, I wouldn’t tell anybody. It’s OK for Peter Wickham to have spoken about that poll when he did and the terms in which he did. I know what the numbers were. And if we do a poll, we would decide whether — and frankly speaking, not we; I would decide, because when you are running an election, you have to assume the position of commander-in-chief.

“I would decide what would be released and what would not be released, if anything at all,” Gonsalves said, adding that he will not release poll results for the pleasure of the media.

“I am doing it to facilitate in the winning of the election, because that is what it is about; because there is nothing wrong in winning elections. In fact, what is wrong is to organise yourself so badly that you lose elections.”

Gonsalves said that is why he believes that if the head of a mass party loses an election they should resign.

He, however, noted that whether the party accepts the resignation is another matter.

When asked if he would step down if he loses the Dec. 9 elections, Gonsalves said, “Yes.”

“Whether the party will accept it is a different question. Those are issues which they would have to decide — what is in the best interest of the party. So I can offer it personally as a matter o principle. That is not within my contemplation because we ain’t going lose,” Gonsalves said.